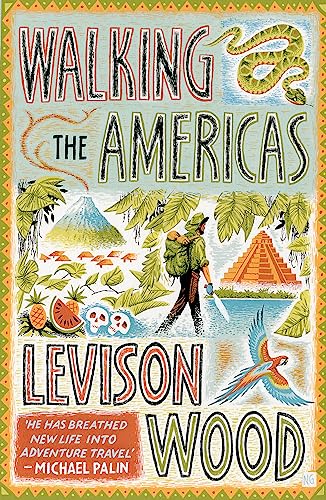 Walking the Americas
by Levison Wood

In Stock
16,99 $
inc. GST
From the bestselling author of Walking the Himalayas and Walking the Nile, explorer Levison Wood begins his next challenging adventure - walking 1,700 miles along the spine of the Americas from Mexico to Colombia.
Like New Very Good
Only 1 left

Walking the Americas: 'A wildly entertaining account of his epic journey' Daily Mail by Levison Wood

BY THE AUTHOR OF WALKING THE HIMALAYAS, WINNER OF THE 2016 EDWARD STANFORD ADVENTURE TRAVEL BOOK OF THE YEAR AWARD

Walking the Americas chronicles Levison Wood's 1,800 mile trek along the spine of the Americas, through eight countries, from Mexico to Colombia, experiencing some of the world's most diverse, beautiful and unpredictable places.

His journey took him from violent and dangerous cities to ancient Mayan ruins lying still unexplored in the jungles of Mexico and Guatemala. He encountered members of indigenous tribes, migrants heading towards the US border and proud Nicaraguan revolutionaries on his travels, where at the end of it all, he attempted to cross one of the most impenetrable borders on earth: the Darien Gap route from Panama into South America.

This trek required every ounce of Levison Wood's guile, tact, strength and resilience in one of the most raw, real and exciting journeys of his life.

Levison Wood is a great adventurer and a wonderful storyteller. - Sir Ranulph FiennesBritain's best-loved adventurer... he looks like a man who will stare danger in the face and soak up a lot of pain without complaint. - The TimesLevison Wood has breathed new life into adventure travel. - Michael Palin

GOR010637857
Walking the Americas: 'A wildly entertaining account of his epic journey' Daily Mail by Levison Wood
Levison Wood
Used - Like New
Paperback
Hodder & Stoughton
2018-01-25
304
1473654092
9781473654099
N/A
Book picture is for illustrative purposes only, actual binding, cover or edition may vary.
The book has been read, but looks new. The book cover has no visible wear, and the dust jacket is included if applicable. No missing or damaged pages, no tears, possible very minimal creasing, no underlining or highlighting of text, and no writing in the margins.