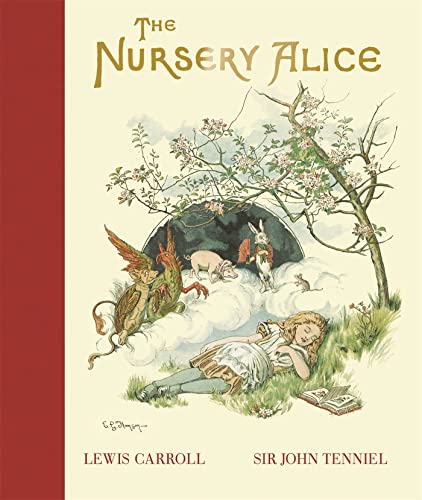 The Nursery Alice
by Lewis Carroll

The Nursery Alice by Lewis Carroll

"I wrote to Macmillan to suggest a new idea: a 'Nursery Edition' of Alice with pictures printed in." Lewis Carroll's diary, 15th February, 1881

The Nursery Alice, originally published by Macmillan & Co. in 1890, was the very first colour edition of Alice. It was intended, wrote Carroll, "to be read by Children aged from Nought to Five. To be read? Nay, not so! Say rather to be thumbed, to be cooed over, to be dogs'-eared, to be rumpled, to be kissed . . ."

With this new, younger readership in mind, Carroll rewrote Alice, simplifying and abridging the original text, while Tenniel redrew, enlarged and coloured twenty of his iconic illustrations. The resulting book is a delightfully engaging experience, readers prompted to interact not only with the story but also with the images and even the physical book itself, in a way that is thoroughly modern.

Gloriously reproduced for the anniversary year, this edition retains the every word of the original The Nursery Alice and restores the exquisite delicacy of Tenniel's artwork - lost in reproductions across the decades - along with the delightful cover artwork by Emily Gertrude Thomson. This gem of a book is the perfect introduction to Alice, a delight for child and adult readers alike.

Lewis Carroll was the pen-name of Charles Lutwidge Dodgson. Born in 1832, Dodgson was a mathematics tutor at Christ Church College, Oxford, where he met Alice Liddell, daughter of the dean, and inspiration for Alice's Adventures in Wonderland. The book and its sequel, Through the Looking-Glass and What Alice Found There, have delighted children the world over for 150 years.

Sir John Tenniel was already a renowned cartoonist when he was invited to produce illustrations for Alice. His exquisite engravings are among the most iconic and best loved images in the world.

GOR007196033
The Nursery Alice by Lewis Carroll
Lewis Carroll
Used - Very Good
Hardback
Pan Macmillan
2015-02-05
72
1447287118
9781447287117
N/A
Book picture is for illustrative purposes only, actual binding, cover or edition may vary.
This is a used book - there is no escaping the fact it has been read by someone else and it will show signs of wear and previous use. Overall we expect it to be in very good condition, but if you are not entirely satisfied please get in touch with us.