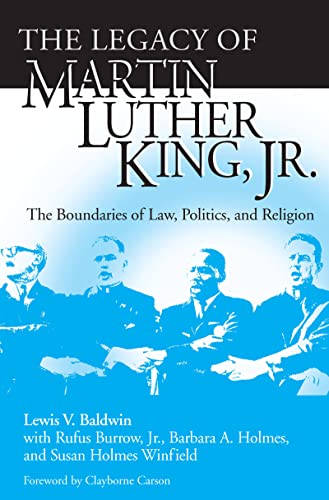 This volume explores the development of Martin Luther King, Jr's understanding of the relationship between religion, morality, law and politics. It focuses attention on King's refusal to separate religious faith and moral considerations from politics, legal matters and social reformism.

Legacy of Martin Luther King, Jr., The: The Boundaries of Law, Politics, and Religion by Lewis V. Baldwin

The Legacy of Martin Luther King, Jr. explores the development of Martin Luther King, Jr.'s understanding of the relationship between religion, morality, law, and politics. This fascinating work is part of a broader effort by scholars in various fields to examine unexplored areas in the life, thought, and activism of Martin Luther King, Jr., and it represents the first book length treatment of how King united moral-religious convictions and political activity. This timely study is also the first in-depth analysis of King's views on the roles that religion and morality ought to play, not only in public debate concerning political choices and law, but also in efforts to create political and legal structures that are just and to perpetuate participatory democracy.

Beginning with the social, political, and economic implications of King's vision of the New South and his prophetic critique of southern civil religion, this pathbreaking study casts King in the role of political liberal, consummate politician, and political theologian. The Legacy of Martin Luther King, Jr. focuses considerable attention on King's refusal to separate religious faith and moral considerations from politics, legal matters, and social reformism. In so doing, it demonstrates King's remarkable ability to transcend church-state boundaries and to formulate an alliance that permeated every facet of American life.

Featuring four chapters by Lewis V. Baldwin-a leading authority on King-as well as a chapter by Rufus Burrow, Jr., and one co-authored by Barbara Holmes and the Honorable Susan Holmes Winfield, this volume reveals how King moved beyond southern particularism to create a more democratic America and a more inclusive world. Among the topics covered are King's relationship to various American political traditions and figures, King's theories of civil disobedience and his understanding of the Constitution, and the influence of moral law and personal idealism on King's teachings.

As debates over faith-based initiatives rage in America's modern political arena, Baldwin's lucid analysis of King's writings on the boundaries that exist between church and state, politics and religion, offers a valuable resource to those engaged in public and private discussions of this important topic.

The essays in this collection are a most welcome correction to the widely disseminated view of King as simply another integration-oriented civil rights leader. His legacy is accurately portrayed here as transcending the boundaries of law, politics, and religion, to embody in the twentieth century the spiritual essence of Jesus' teachings. -- Derrick Bell, author of Faces at the Bottom of the Well: The Permanence of Racism
Baldwin has established himself among the preeminent scholars on King and the Civil Rights Movement. Baldwin's scholarship is impressive, and his essays are clear and engaging. This book argues persuasively that King was much more than a dreamer: he was a thinker and activist who had a deep effect on culture and politics; his ideas remain relevant. -- Choice
Each essay makes a notable contribution to the literature. Futhermore, and perhaps as important, the book serves as something of a blueprint for future research. The topical essays manage to cover a great deal of ground and add greatly to our understanding of King's views on the intertwining nature of law, politics, morality, and religion. -- Political Science Quarterly
These impressive essays argue that not all students of King have accepted, let alone appreciated, his political, economic, legal and religious radicalism. . . . The battle over King's legacy no doubt will rage on. But Baldwin and his colleagues have rightly called us back to the textual evidence. They have thereby empowered us to fight even more faithfully for the beloved community that King hoped would be his enduring legacy. -- Christian Century
a focused introduction to the social, political, and theological dimensions of King's thought. -- Journal of Religion
This is a remarkable book. Looking at the civil rights movement of the 20th Century through the lens of Martin Luther King's thought and work, it casts a blazing light on the manner in which religion and politics were linked to achieve profound social change. Even more important, the book can be a guidepost in the 21st Century for those who want to apply their Judeo-Christian faith to the unfinished struggle to dismantle the white supremacist structures that have imprisoned us all. -- Anne Braden, writer and social justice activist
Lewis Baldwin has come closest to defining the mystique of Martin Luther King, Jr. He has succeeded where so many other writers have failed because they only digest some facet of the King phenomenon. Baldwin unveils the globalist aspect of Dr. King's life and mission for all the world to see. This is a must-read book. -- Wyatt Tee Walker, former Chief of Staff to Dr. King and current Senior Pastor and CEO of the Canaan Baptist Church of Christ in New York's Harlem Community
W]ell-researched, well-conceptualized, and well-written books.... [S]uitable readings for students at the high school and college levels, not to mention the general reading public. -- MultiCultural Review
Lewis Baldwin and his colleagues have made a significant contribution to the scholarly literature on Martin Luther King Jr., by producing this cogent and compelling analysis of how law, religion, and politics intersected to influence King's ideas about the responsibility of the State to promote a more inclusive and democratic society. -- Carol M. Swain, professor of law and professor of political science, Vanderbilt University Law School
Fresh and provocative, these essays demonstrate that despite the outpouring of print on King, surprising, unplumbed dimensions remain to be explored. Essential for King scholars and for collections on religious studies, civil rights, or the moral politics of contemporary America. -- Library Journal
This book is worthwhile reading for all who are interested in Martin Luther King, Jr., the Civil Rights Movement, or the ways in which politics and religion interact. -- Journal of Church and State
The Legacy of Martin Luther King, Jr. is the most comprehensive and penetrating study of King's legacy in law, politics, and religion that has thus far appeared. It is brilliant in analysis, interpenetrating in synoptic overview, and relevant for policy building and nonviolent action. -- Dr. Walter Muelder, mentor to Dr. King and Dean Emeritus of the Boston University School of Theology
This text portends a unique contribution to understanding King's legacy and delivers finely. The analysis is sophisticated while remaining accessible to general audiences, and the interdisciplinary focus should prove a great asset to scholars in political theory, legal studies, religion, history and American studies. -- Journal of Southern Religion
Lewis V. Baldwin is professor emeritus of religious studies at Vanderbilt University and author of several books on various aspects of the African American and southern religious experience, including three titles on the life, thought, and activism of Martin Luther King, Jr.
NLS9780268033552
9780268033552
0268033552
Legacy of Martin Luther King, Jr., The: The Boundaries of Law, Politics, and Religion by Lewis V. Baldwin
Lewis V. Baldwin
New
Paperback
University of Notre Dame Press
20020301
336
N/A
Book picture is for illustrative purposes only, actual binding, cover or edition may vary.
This is a new book - be the first to read this copy. With untouched pages and a perfect binding, your brand new copy is ready to be opened for the first time
Trustpilot