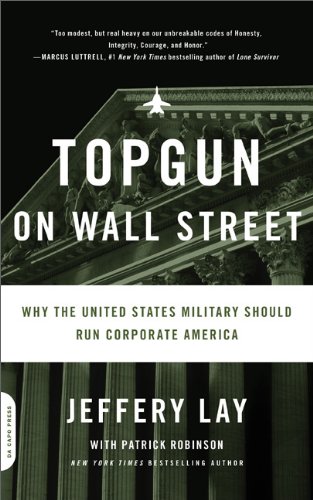 TOPGUN on Wall Street chronicles one man s extraordinary journey from the cornfields of Ohio, to the cockpit of an F-14, to the boardrooms on Wall Street. Lieutenant Commander Jeffery Lay and #1 New York Times bestselling author Patrick Robinson bring a provocative, ground-breaking voice to the business landscape with a revolutionary answer for stabilizing corporate America: business the military way.
As a TOPGUN fighter pilot, Lieutenant Commander Lay perfected a tried-and-true military technique:
PLAN BRIEF EXECUTE DEBRIEF
However, when he retired from active duty in 2006 and went to work for a subsidiary of the ill-fated Lehman Brothers, he noticed that everything about the business world was different: less efficient, awash with excuses for failure, allowance of men with tricky morals to rise to the top, self-gain overshadowing teamwork, and a devastating lack of accountability.
With such deeply rooted flaws, is corporate America doomed for perpetual failure?
Answer: Not if we put admirals in charge and adopt the military s tight chain of command.
This game-changing thesis is interwoven with Lieutenant Commander Lay s dramatic story, including his high-intensity strike fighter aircraft landings, never-before-written details of the United States Navy Fighter Weapons School (TOPGUN), and his heart-breaking, humbling, and inspirational battle with cancer at the peak of his military career.
TOPGUN on Wall Street is written by a leader determined to show the business world that excellence is a choice and perfection is attainable."

An accomplished Mission Commander and graduate of the vaunted Navy Fighter Weapons School (TOPGUN), he flew more than 50 combat missions, made over 400 carrier landings, and accumulated over 3,500 flight hours during three combat deployments to Southwest Asia, the Mediterranean Sea, and the Persian Gulf.

At the height of his military career, Jeff was diagnosed with an advanced form of Hodgkin s lymphoma. Told he would never fly again,
he fought the disease with unspeakable courage, choosing to undergo an experimental form of chemotherapy. Jeff ultimately beat cancer and returned to the cockpit fittingly on Veteran s Day, 1998.

Following retirement from active duty, Jeff went on to serve as a wealth advisor at Neuberger Berman then a Lehman Brothers company. Disenchanted with the bets Lehman made, he ultimately left the ill-fated investment bank and founded a global wealth management firm in Cincinnati, Ohio based on the risk controls he learned at TOPGUN.

Jeff is also a highly sought after speaker for his expertise in aviation, business, finance, and motivation. A recipient of the University of Cincinnati Award for Entrepreneurial Excellence, he works with an exclusive list of clientele who appreciate his ability to see and manage risk in the most demanding, high performance environments imaginable.

Patrick Robinson is the co-author of the New York Times #1 nonfiction bestseller Lone Survivor. He is also the author of seven international bestselling suspense thrillers, including Intercept, Diamondhead, To the Death, and The Delta Solution, as well as several nonfiction bestsellers, including his New York Times bestseller, A Colossal Failure of Common Sense: The Inside Story of the Collapse of Lehman Brothers. He lives in Ireland and spends his summers in Cape Cod, Massachusetts.

GOR009714246
TOPGUN on Wall Street: Why the United States Military Should Run Corporate America by Lieutenant Commander Jeffery Lay
Lieutenant Commander Jeffery Lay
Used - Good
Paperback
INGRAM PUBLISHER SERVICES US
2013-05-09
336
0306822512
9780306822513
N/A
Book picture is for illustrative purposes only, actual binding, cover or edition may vary.
The book has been read but remains in clean condition. All pages are intact and the cover is intact. Some minor wear to the spine.