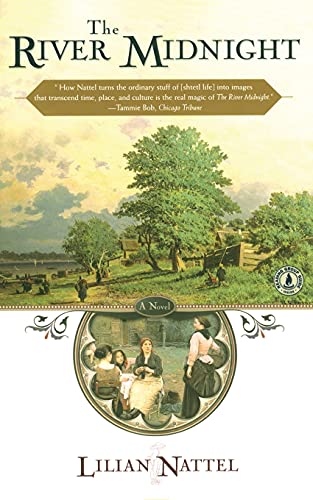 The River Midnight
by Lilian Nattel

Out of Stock
$18.49
inc. GST
The author turns her own family history into the story of five women, Polish Jews living in a ghetto outside Warsaw before the cataclysm of World War II.
Very Good
Only 0 left

The River Midnight by Lilian Nattel

In her stunning debut novel, Lilian Nattel brilliantly brings to life the richness of shtetl culture through the story of an imagined village: Blaszka, Poland. Myth meets history and characters come to life through the stories of women's lives and prayers, their secrets, and the intimate details of everyday life.
When they were young, four friends were known as the vilda bayas, the wild creatures. But their adult lives have taken them in different directions, and they've grown apart. One woman, Misha, is now the local midwife. In a world where strict rules govern most activities, Misha, an unmarried, independent spirit becomes the wayward heart of Blaszka and the keeper of town secrets. But when Misha becomes pregnant and refuses to divulge the identity of her baby's father, hers becomes the biggest secret of all, and the village must decide how they will react to Misha's scandalous ways.
Nattel's magical novel explores the tension between men and women, and celebrates the wordless and kinetic bond of friendship.

Laura Rose USA Today Readers who appreciate the magic of quality research wrapped in a well-told tale will find Blaszka worth a visit.
Tammie Bob Chicago Tribune How Nattel turns the ordinary stuff of [shtetl life] into images that transcend time, place and culture is the real magic of The River Midnight.
Sandra Brooks-Dillard The Denver Post The River Midnight, Lilian Nattel's lovely first novel, is like Fiddler on the Roof without the music...lovingly written, beautifully crafted, meticulously researched.
Megan Harlan Entertainment Weekly Nattel's emotional, panoramic narrative proves extraordinary.
Natasha Stovall The Washington Post [A] mesmerizing first novel...The River Midnight is not simply remarkable as a historical text. Nattel's flair for the telling detail is just one treasure in her bag of writer's tricks.
Roy Hoffman The New York Times Book Review As enchanting as a Chagall mural...Nattel writes with refreshing bawdiness.
R. Z. Sheppard Time [Nattel's] supple narrative technique weds the discipline of scholarship with artistic license. The River Midnight is inspired match-making.
Janice Pomerance Nimura Newsday A magic-realist novel with equal attention to both magic and reality -- not an easy line to walk....Nattel weaves all the strands together in a visionary climax that unites the village and points across the generations to herself.
Paula Friedman The San Diego Union-Tribune Lilian Nattel has written a first novel of wondrous mythical depth and rare spiritual beauty....No doubt possessing prodigious literary gifts, Nattel's depth of study and passion for her subject also accounts for The River Midnight's stunning originality.
R.Z. Sheppard Time The River Midnight [is reminiscent] of Marc Chagall's romantic paintings. Like Faulkner's Yoknapatawpha County and Garc a M rquez's Macondo, Nattel's imagined backwater is shot through with mythic significance.

Lilian Nattel won the Martin and Beatrice Fisher Jewish Book Award for her internationally acclaimed first novel, The River Midnight. She lives in Toronto with her family.

GOR003320599
The River Midnight by Lilian Nattel
Lilian Nattel
Used - Very Good
Paperback
Simon & Schuster
1999-10-01
418
0684853043
9780684853048
N/A
Book picture is for illustrative purposes only, actual binding, cover or edition may vary.
This is a used book - there is no escaping the fact it has been read by someone else and it will show signs of wear and previous use. Overall we expect it to be in very good condition, but if you are not entirely satisfied please get in touch with us.