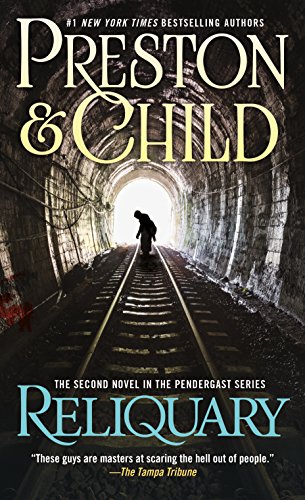 When two skeletons are found off the Manhattan shoreline, museum curator and anthropological expert Margo Green is called in by the police because of her earlier experiences in battling a horrific beast in the museum.

Hidden deep beneath Manhattan lies a warren of tunnels, sewers, and galleries, mostly forgotten by those who walk the streets above. There lies the ultimate secret of the Museum Beast. When two grotesquely deformed skeletons are found deep in the mud off the Manhattan shoreline, museum curator Margo Green is called in to aid the investigation. Margo must once again team up with police lieutenant D'Agosta and FBI agent Pendergast, as well as the brilliant Dr. Frock, to try and solve the puzzle. The trail soon leads deep underground, where they will face awakening of a slumbering nightmare.

"Preston and Child carry off this sequel with great energy and panache. In particular, their portrait of the underground dwellers lifts this thriller into a category all its own." --Chicago Tribune

"The sequel to the popular Relic hits all the right buttons for those looking for thrills and chills from things that go bump in the night.... Another page-turner that cries out for translation to the silver screen." --The Orlando Sentinel

Douglas Preston and Lincoln Child are the co-authors of the Pendergast series of thrillers, including such bestselling titles as Fever Dream, The Book of the Dead, The Wheel of Darkness, and Relic, which became a number one box office hit movie.

Douglas Preston's solo novels include the New York Times bestsellers Impact, Blasphemy, The Codex, and Tyrannosaur Canyon. His nonfiction book The Monster of Florence is being made into a film starring George Clooney.

GOR011142860
Reliquary by Lincoln Child
Lincoln Child
Used - Like New
Paperback
Unknown
0
0812542835
9780812542837
N/A
Book picture is for illustrative purposes only, actual binding, cover or edition may vary.
The book has been read, but looks new. The book cover has no visible wear, and the dust jacket is included if applicable. No missing or damaged pages, no tears, possible very minimal creasing, no underlining or highlighting of text, and no writing in the margins
Trustpilot