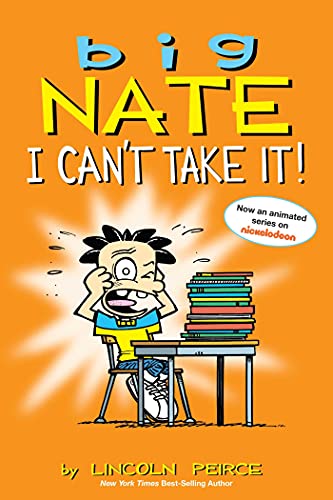 Big Nate: I Can't Take It!
by Lincoln Peirce

Big Nate: I Can't Take It! by Lincoln Peirce

The second collection of all-colour SundayBig Natecartoons! Big Nate All Work and No Play,the first all-Sunday collection shipped more than 100,000 copies in its first month of publication.

Nate Wright is a wisecracking 11-year-old who knows he's destined for greatness. Nate is the star of Big Nate, the daily and Sunday comic strip that made its debut in 1991. Nate's a sixth-grade chess prodigy, a self-described genius, and the all-time record holder for detentions in school history. He's often in hot water with his teachers and classmates, but Nate's winning personality and can-do attitude always make him a big hit with readers.

"In addition to the graphic storytelling, Nate's cartoons interspersed among Peirce's panels could provide teachers and librarians with great opportunities to incorporate this series into programs or lessons on cartooning and writing." (Snow Wildsmith, Booklist)
"...if you're looking for a new series to introduce your kids to this upcoming holiday season, chances are they'll really like these collections." (Rich Johnston, Bleeding Cool)
"Big Nate is super funny. I love these books." (Appeal-Democrat)

Lincoln Peirce has been drawing the Big Nate comic strip for more than 20 years. Born in Ames, Iowa, Peirce grew up in Durham, New Hampshire. As a kid, he began creating his own strips in the sixth grade. Peirce taught high school in New York City and has created several animated pilots for Cartoon Network and Nickelodeon. He lives in Portland, Maine, with his family.

GOR006063632
Big Nate: I Can't Take It! by Lincoln Peirce
Lincoln Peirce
Big Nate
Used - Very Good
Paperback
Andrews McMeel Publishing
2013-10-24
224
1449429378
9781449429379
N/A
Book picture is for illustrative purposes only, actual binding, cover or edition may vary.
This is a used book - there is no escaping the fact it has been read by someone else and it will show signs of wear and previous use. Overall we expect it to be in very good condition, but if you are not entirely satisfied please get in touch with us.