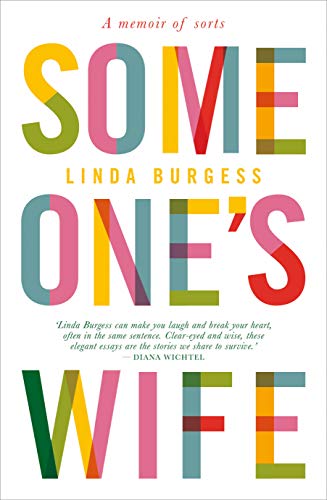 Someone'S Wife: A Memoir of Sorts by Linda Burgess

'Linda Burgess can make you laugh and break your heart, often in the same sentence. Clear-eyed and wise, these elegant essays are the stories we share to survive.' Diana Wichtel

'You'll want to read this in one sitting but it's worth savouring every line.' Madeleine Chapman

'Somehow it makes perfect sense that a great New Zealand memoir would be written by a dreamy, left-handed wife of an ex-All Black.' Steve Braunias

These pieces read like the freshest of recent novels: clever, restrained and wittily observant. They range across the personal and the observational. There are essays on Linda's lifetime of being an All Black wife (once an AB, always an AB); her love of teaching, education and the young; and a powerful essay on the death of her baby, Toby, striking in its honesty.

Linda is interested in family and friendship; shared and sometimes distorted memories. Her personal truths link to universal truths. She explores the era in which she grew up, and her experiences are timeless. She looks at living abroad, at children leaving home, at house-hunting in Wellington, at travelling with a grandchild, at Leonard Cohen concerts as tribal gatherings.

Linda Burgess is the author of three novels, three non-fiction titles and one collection of short stories. She is a monthly television reviewer on Radio New Zealand on Afternoons with Jesse Mulligan, and was a television and film reviewer at The Dominion Post for several years. She has won several literary awards and has been a judge for a number of our national awards. Linda was a finalist in the Voyager Media Awards 2019 with her essay 'We'd be called WAGs now'. She lives in Wellington.

GOR010736229
Someone'S Wife: A Memoir of Sorts by Linda Burgess
Linda Burgess
Used - Very Good
Paperback
Allen & Unwin
2019-09-03
304
1988547253
9781988547251
N/A
Book picture is for illustrative purposes only, actual binding, cover or edition may vary.
This is a used book - there is no escaping the fact it has been read by someone else and it will show signs of wear and previous use. Overall we expect it to be in very good condition, but if you are not entirely satisfied please get in touch with us.