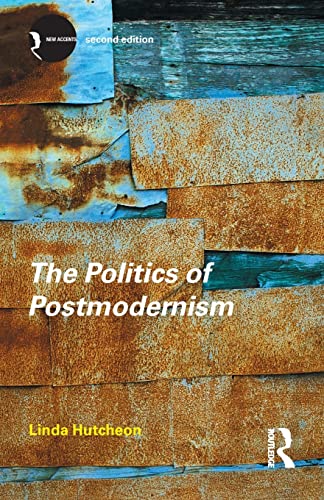 The Politics of Postmodernism
by Linda Hutcheon

Out of Stock
$21.99
+10% GST
Working through the issue of representation, in art forms from fiction to photography, Linda Hutcheon sets out postmodernism's highly political challenge to the dominant ideologies of the western world.
Very Good
Only 0 left

The Politics of Postmodernism Summary

The Politics of Postmodernism by Linda Hutcheon

This classic text remains one of the clearest and most incisive introductions to postmodernism. Perhaps more importantly, it is a compelling discussion of why postmodernism matters. Working through the issue of representation in art forms from fiction to photography, Linda Hutcheon sets out postmodernism's highly political challenge to the dominant ideologies of the western world. A new epilogue traces the fate of the postmodern over the last ten years and into the future, responding to claims that it has, once and for all, 'failed'.
Together with the new epilogue, this edition contains revised notes on further reading and a fully updated bibliography. This revised edition of The Politics of Postmodernism continues its position as essential reading.

Linda Hutcheon is Professor of English and Comparative Literature at the University of Toronto. She has published extensively on postmodernism, parody and irony (including Irony's Edge: The Theory and Politics of Irony) and has recently done interdisciplinary work with Michael Hutcheon on opera and medicine (Opera: Desire, Disease and Death, and Bodily Charm: Living Opera).

General editor's preface. Acknowledgements. 1. Representing the postmodern: What is postmodernism? Representation and its politics, Whose postmodernism? Postmodernity, postmodernism, and modernism. 2. Postmodernist representation: De-naturalizing the natural, Photographic discourse, Telling Stories: fiction and history. 3. Re-presenting the past: 'Total history' de-totalized, Knowing the past in the present, The archive as text. 4. The politics of parody: Parodic postmodern representation, Double-coded politics, Postmodern film? 5. Text/image border tensions: The paradoxes of photography, The ideological arena of photo-graphy, The politics of address 6. Postmodernism and feminisms: Politicizing desire, Feminist postmodernist parody, The private and the public. Concluding note: some directed reading. Bibliography. Index.

GOR002005919
The Politics of Postmodernism by Linda Hutcheon
Linda Hutcheon
New Accents
Used - Very Good
Paperback
Taylor & Francis Ltd
2002-05-16
232
0415280168
9780415280167
N/A
Book picture is for illustrative purposes only, actual binding, cover or edition may vary.
This is a used book - there is no escaping the fact it has been read by someone else and it will show signs of wear and previous use. Overall we expect it to be in very good condition, but if you are not entirely satisfied please get in touch with us.