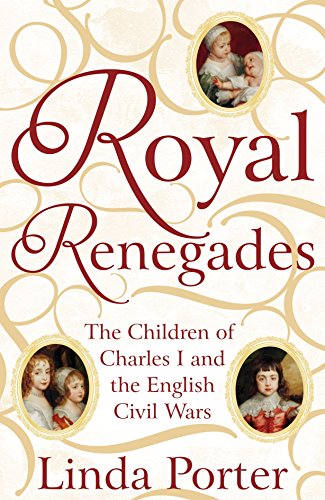 Used Price
$23.99
inc. GST
Free Shipping in Australia
A vivid account of the children of Charles I and how they reacted when their calm and loving family life was shattered by the Civil War and the execution of their father.
Very Good

Royal Renegades: The Children of Charles I and the English Civil Wars by Linda Porter

The fact that the English Civil War led to the execution of King Charles I in January 1649 is well known, as is the restoration of his eldest son as Charles II eleven years later. But what happened to the king's six surviving children is far less familiar.

Casting new light on the heirs of the doomed king and his unpopular but indefatigable Catholic queen, Henrietta Maria, acclaimed historian Linda Porter brings to life their personalities, legacies, feuds and rivalries for the first time. As their calm and loving family life was shattered by war, Elizabeth and Henry were used as pawns in the parliamentary campaign against their father; Mary, the Princess Royal, was whisked away to the Netherlands as the child bride of the Prince of Orange; Henriette Anne's redoubtable governess escaped with the king's youngest child to France where she grew up under her mother's thumb and eventually married the cruel and flamboyant Philippe d'Orleans. When their 'dark and ugly' brother Charles eventually succeeded his father to the English throne after fourteen years of wandering, he promptly enacted a vengeful punishment on those who had spurned his family, with his brother James firmly in his shadow.

A tale of love and endurance, of battles and flight, of educations disrupted, the lonely death of a young princess and the wearisome experience of exile, Royal Renegades charts the fascinating story of the children of loving parents who could not protect them from the consequences of their own failings as monarchs and the forces of upheaval sweeping England.

Charles I was, even his wife and key advisers conceded, lacking in the essential strength that a ruler required, in turbulent times. But even Charles's enemies were moved by his loving devotion as a father. Linda Porter looks with sympathy and fluent scholarship at the lives of the six, beloved, Stuart princes and princesses, illuminating how their father's failure as a king inevitably impacted their lives, before the survivors strived to forge their own destinies. -- Charles Spencer, author of Killers of the King
A wonderful story, both poignant and touching, of the family heartbreak that lay behind the public politics of the Civil Wars. -- Janice Hadlow, author of The Strangest Family
One of the great untold stories of British history - a prince who knew what it was like to live as a pauper, an exiled princess as estranged from her husband as from England. Linda Porter's pacy and impeccably researched history takes the five surviving children of Charles I and gives full weight to the personal as well as the political stories. -- Sarah Gristwood, author of Arbella and Blood Sisters

Linda Porter was the winner of the 2004 Biographers Club / Daily Mail Prize, and is the author of three critically acclaimed history books: Mary Tudor: The First Queen, Katherine the Queen: the Remarkable Life of Katherine Parr and Crown of Thistles: The Fatal Inheritance of Mary Queen of Scots. She is a regular contributor to BBC History Magazine and History Today. She lives in Kent.

GOR007756577
Royal Renegades: The Children of Charles I and the English Civil Wars by Linda Porter
Linda Porter
Used - Very Good
Hardback
Pan Macmillan
2016-09-27
448
1447267540
9781447267546
N/A
Book picture is for illustrative purposes only, actual binding, cover or edition may vary.
This is a used book - there is no escaping the fact it has been read by someone else and it will show signs of wear and previous use. Overall we expect it to be in very good condition, but if you are not entirely satisfied please get in touch with us.