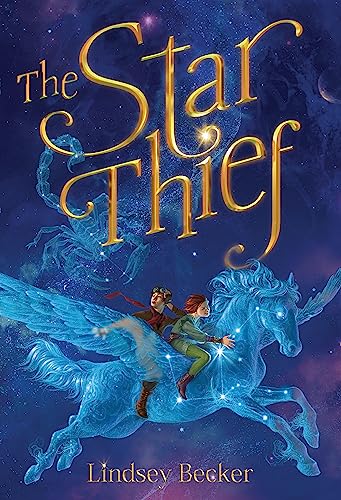 The Star Thief
by Lindsey Becker

Used Price
$17.49
inc. GST
Free Shipping in Australia
For fans of Rick Riordan, the constellations come to life in this paperback edition of an imaginative fantasy adventure debut.
Very Good

The Star Thief by Lindsey Becker

For fans of Rick Riordan, the constellations come to life in this paperback edition of an imaginative fantasy adventure debut.

Honorine's life as as maid at the Vidalia mansion is rather dull, dusting treasures from faraway places and daydreaming in front of maps of the world. But everything changes when she catches two brutish sailors ransacking Lord Vidalia's study, and then follows a mysterious girl with wings out into the night....

Suddenly, Honorine is whisked into the middle of a battle between the crew of a spectacular steamship and a band of mythical constellations. The stars in the sky have come to life to defend themselves against those who want to harness their powers. Much to her surprise, Honorine is the crux of it all, the center of an epic clash between magic and science, the old ways and the new. But can this spirited young girl bring both sides of a larger-than-life fight together before they unleash an evil power even older than the stars?

A Spring 2017 Kids' Indie Next List ChoiceA Winter/Spring 2017 Indies Introduce Choice
"[An] adventure of the galactic variety.... A fun, Rick Riordanesque escapade."--Booklist
"The pace is fast, the characters believable, and the setting original.... Readers enjoying a mix of fantasy, adventure, and a clever heroine will fall for this one."--Kirkus Reviews
"The zippy pace...moves from one epic battle, chase, or discovery to another.... [Honorine is] a smart, daring girl."--The Bulletin
"Readers will find it easy to connect emotionally with Honorine as she tries to navigate a world with no clear answers, while fantasy lovers will appreciate the mythological underpinnings of this imaginative new world. A fine addition to large fantasy collections."--School Library Journal
"Featuring both cannonballs and magic, the story will appeal to fantasy and adventure readers alike....but the book is perfect for any young reader."--School Library Connection

Lindsey Becker writes middle grade fiction about ghosts, monsters, mythical beasts, and daring children who love adventure and magic. The Star Thief is her debut novel, and she invites you to visit her online at literarylilycate.blogspot.com or @lcatebecker. She lives in Wisconsin.

GOR009828070
The Star Thief by Lindsey Becker
Lindsey Becker
Used - Very Good
Paperback
Little, Brown & Company
2018-04-24
304
0316348538
9780316348539
N/A
Book picture is for illustrative purposes only, actual binding, cover or edition may vary.
This is a used book - there is no escaping the fact it has been read by someone else and it will show signs of wear and previous use. Overall we expect it to be in very good condition, but if you are not entirely satisfied please get in touch with us.