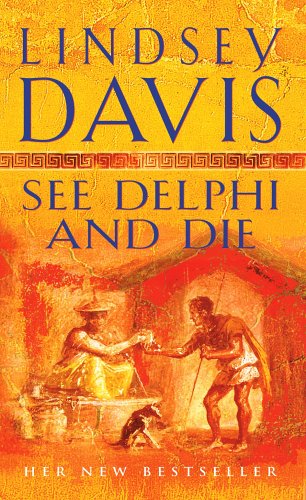 In Stock
$13.49
inc. GST
Stunned by a dramatic appeal from his otherwise cool mother-in-law, Falco cannot resist.Joining the rest of the married couple's tour group on the remains of their Grand Tour, Falco and Helena seize the opportunity to interview the owner/manager of 'Seven Sights Travel', as well as the other guests.
Very Good Good
8 in stock

Stunned by a dramatic appeal from his otherwise cool mother-in-law, Falco cannot resist. His brother-in-law, Aulus, has been diverted from his route to Athens University by a man whose newly married daughter disappeared, with her husband, while visiting the Olympic Games as part of an extended wedding trip. Suspecting a classic cover-up, Aulus enrolls Falco's help in solving the case. And of course his mother-in-law hopes to hurry her son along to university by passing the case over to Falco. Joining the rest of the married couple's tour group on the remains of their Grand Tour, Falco and Helena seize the opportunity to interview the owner/manager of 'Seven Sights Travel', as well as the other guests. Seemingly not getting very far, they can at least make the most of the splendid sights; but finally, on reaching Delphi, Falco and Helena unravel the mystery of the bride and groom ...

Lindsey Davis has written over twenty historical novels, beginning with The Course of Honour. Her bestselling mystery series features laid-back First Century detective Marcus Didius Falco and his partner Helena Justina, plus friends, relations, pets and bitter enemy the Chief Spy. After an English degree at Oxford University Lindsey joined the Civil Service, but became a professional author in 1989. Her books are translated into many languages and have been dramatized on BBC Radio 4. Her many prizes include the Premio Colosseo, awarded by the Mayor of Rome `for enhancing the image of Rome', the Sherlock award for Falco as Best Comic Detective and the Crimewriters' Association Cartier Diamond Dagger for lifetime achievement. For more information, please visit www.lindseydavis.co.uk.

GOR000849485
See Delphi And Die: (Falco 17) by Lindsey Davis
Lindsey Davis
Falco
Used - Very Good
Paperback
Cornerstone
2006-06-01
368
009944528X
9780099445289
N/A
Book picture is for illustrative purposes only, actual binding, cover or edition may vary.
This is a used book - there is no escaping the fact it has been read by someone else and it will show signs of wear and previous use. Overall we expect it to be in very good condition, but if you are not entirely satisfied please get in touch with us.