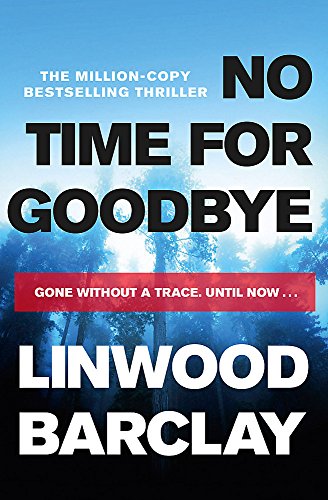 No Time For Goodbye
by Linwood Barclay

No Time For Goodbye Summary

No Time For Goodbye by Linwood Barclay

On the morning she will never forget, suburban teenager Cynthia Archer awakes with a nasty hangover and a feeling she is going to have an even nastier confrontation with her mom and dad. But when she leaves her bedroom, she discovers the house is empty, with no sign of her parents or younger brother Todd. In the blink of an eye, without any explanation, her family has simply disappeared.

Twenty-five years later Cynthia is still haunted by unanswered questions. Were her family murdered? If so, why was she spared? And if they're alive, why did they abandon her in such a cruel way? Now married with a daughter of her own, Cynthia fears that her new family will be taken from her just as her first one was. And so she agrees to take part in a TV documentary revisiting the case, in the hope that somebody somewhere will remember something - or even that her father, mother or brother might finally reach out to her . . .

Then a letter arrives which makes no sense and yet chills Cynthia to the core. And soon she begins to realise that stirring up the past could be the worst mistake she has ever made . . .

No Time For Goodbye Reviews

No Time for Goodbye just flies off the page. It's a one-sit thriller. You sit down with this book and you won't get up until you've turned the last page -- Michael Connelly
Barclay succeeds in both banging the gong and serving up a riveting, rewarding and, for the most part, plausible three courses, though you may need to take a deep breath somewhere around the coffee stage * GUARDIAN *
A fast-moving roller-coaster of a read * DAILY EXPRESS *
Barclay's enjoyably creepy tale...certainly keeps one turning the pages * THE TIMES *
Where has Linwood Barclay been all my life? His is the best thriller I've read in five years. Once I was 30 pages in, I literally couldn't put it down. The writing is crisp; the twists are jolting and completely unexpected -- Stephen King * ENTERTAINMENT WEEKLY *
Seamless, breathless and relentlessly pacey, Barclay barely puts a foot wrong * DAILY MIRROR *

Linwood Barclay is the international bestselling author of many critically acclaimed novels, including NO SAFE HOUSE, A TAP ON THE WINDOW, TRUST YOUR EYES and the Richard & Judy 2008 Summer Read winner and number one bestseller, NO TIME FOR GOODBYE. He lives near Toronto with his wife.

GOR006657649
No Time For Goodbye by Linwood Barclay
Linwood Barclay
Used - Very Good
Paperback
Orion Publishing Co
2015-04-09
464
1409159841
9781409159841
Winner of Richard & Judy Book Club 2008 (UK)
Book picture is for illustrative purposes only, actual binding, cover or edition may vary.
This is a used book - there is no escaping the fact it has been read by someone else and it will show signs of wear and previous use. Overall we expect it to be in very good condition, but if you are not entirely satisfied please get in touch with us.