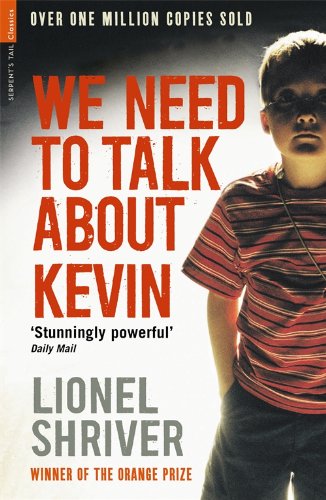 We Need To Talk About Kevin
by Lionel Shriver

In Stock
$15.99
inc. GST
Eva never really wanted to be a mother; certainly not the mother of the unlovable boy who murdered seven of his fellow high school students, a cafeteria worker and a teacher who tried to befriend him. Now, two years later, it is time for her to come to terms with marriage, career, family, parenthood and Kevin's horrific rampage.
Like New Very Good Good Well Read
Only 2 left

We Need To Talk About Kevin Summary

We Need To Talk About Kevin by Lionel Shriver

Eva never really wanted to be a mother; certainly not the mother of the unlovable boy who murdered seven of his fellow high school students, a cafeteria worker and a teacher who tried to befriend him. Now, two years later, it is time for her to come to terms with marriage, career, family, parenthood and Kevin's horrific rampage in a series of startlingly direct correspondences with her absent husband, Franklyn. Uneasy with the sacrifices and social demotion of motherhood from the start, Eva fears that her alarming dislike for her own son may be responsible for driving him so nihilistically off the rails.

We Need To Talk About Kevin Reviews

Once in a while, a stunningly powerful novel comes along, knocks you sideways and takes your breath away: this is it... a horrifying, original, witty, brave and deliberately provocative investigation into all the casual assumptions we make about family life, and motherhood in particular * Daily Mail *
This startling shocker strips bare motherhood... the most remarkable Orange prize victor so far -- Polly Toynbee * Guardian *
An awesomely smart, stylish and pitiless achievement. Franz Kafka wrote that a book should be the ice-pick that breaks open the frozen seas inside us, because the books that make us happy we could have written ourselves. With We Need to Talk About Kevin, Shriver has wielded Kafka's axe with devastating force * Independent *
One of the most striking works of fiction to be published this year. It is Desperate Housewives as written by Euripides... A powerful, gripping and original meditation on evil * New Statesman *
Shriver keeps up an almost unbearable suspense. It's hard to imagine a more striking demolition job on the American myth of the perfect suburban family * Sunday Telegraph *
One of the bravest books I've ever read... We Need to Talk About Kevin is an original, powerful, resonant, witty, fascinating and deeply intelligent work * Sunday Business Post *
A study of despair, a book of ideas and a deconstruction of modern American morality -- David Baddiel * The Times *
This superb, many-layered novel intelligently weighs the culpability of parental nurture against the nightmarish possibilities of an innately evil child * Daily Telegraph *
Urgent, unblinking and articulate * Sunday Times *
[A] powerful, painful novel... There are true, terrible things said here about family life * Saga Magazine *
A fierce challenge of a novel that forces the reader to confront assumptions about love and parenting, about how and why we apportion blame, about crime and punishment, forgiveness and redemption and, perhaps most significantly, about how we can manage when the answer to the question why? is either too complex for human comprehension, or simply non-existent * Independent *
Pitch-perfect, devastating and utterly convincing -- Geoff Dyer
One of my favourite novels... the best thing I've read in years -- Jeremy Vine
We Need to Talk About Kevin is not a treatise on crime prevention but a meditation on motherhood, and a terribly honest one * Wall Street Journal *
What an amazing piece of storytelling. I could not put the book down. -- Shirley Henderson (Bridget Jones & Harry Potter actress) * Daily Express *
One of the most powerful books I've read... brilliant -- Boy George * Elle *
An original and startling story of family life. A brilliant and thought-provoking read. -- Jackie Brown * Woman's Own *

Lionel Shriver is a novelist whose previous books include The Post-Birthday World, A Perfectly Good Family, Game Control, Double Fault, The Female of the Species, Checker and the Derailleurs, and Ordinary Decent Criminals. She is widely published as a journalist, writing features, columns, op-eds, and book reviews for the Guardian, New York Times, Wall Street Journal, Financial Times, Economist, Marie Claire, and many others. She is frequently interviewed on television, radio and in print media. She lives in London and Brooklyn, NY.

GOR008287062
We Need To Talk About Kevin by Lionel Shriver
Lionel Shriver
Serpent's Tail Classics
Used - Like New
Paperback
Profile Books Ltd
2010-04-29
496
1846687349
9781846687341
N/A
Book picture is for illustrative purposes only, actual binding, cover or edition may vary.
The book has been read, but looks new. The book cover has no visible wear, and the dust jacket is included if applicable. No missing or damaged pages, no tears, possible very minimal creasing, no underlining or highlighting of text, and no writing in the margins.