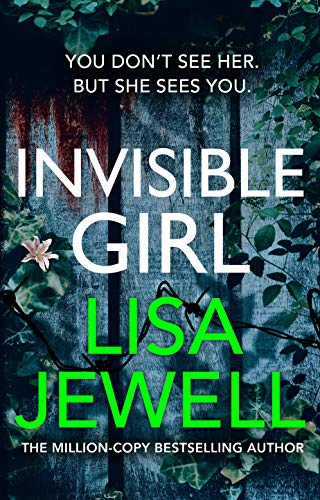 Invisible Girl: Discover the bestselling new thriller from the author of The Family Upstairs by Lisa Jewell

From the #1 bestselling author of THE FAMILY UPSTAIRS and THEN SHE WAS GONE comes an engrossing, twisty story of dark family secrets and betrayal.

MIDNIGHT: In an area of urban wasteland where cats hunt and foxes shriek, a girl is watching...

When Saffyre Maddox was ten, something terrible happened, and she's carried the pain of it ever since. The man who she thought was going to heal her didn't, and now she hides, learning his secrets, invisible in the shadows.

Owen Pick is invisible too. He's never had a girlfriend; he's never even had a friend.
Nobody sees him. Nobody cares.

But when Saffyre goes missing from opposite his house on Valentine's night, suddenly the whole world is looking at Owen.

Accusing him. Holding him responsible for Saffyre's disappearance...

INVISIBLE GIRL: an engrossing, twisty story of how we look in the wrong places for bad people while the real predators walk among us in plain sight.
_________________________________
'I've really struggled with reading during lockdown but this weekend I finished Lisa Jewell's gripping Invisible Girl and it was such a joy not to be able to put a book down. Her best yet.' JOJO MOYES

'A masterclass in how to write with pace and tension.' HARRIET TYCE

'An engrossing and compelling read.' MIRROR

'Another twisty, turny and tangled thriller from Lisa Jewell, which also manages to deliver a really satisfying and shocking denouement.' RED

'She isn't afraid of plunging an icy blade into her readers' hearts whilst examining the cruel realities of the world.' ADELE PARKS

'A masterclass in character... A wonderful slow-burn gripper - I loved it.' LOUISE CANDLISH

'An up-all-night gripping story with characters who feel as real as you and me.' ERIN KELLY

'Not only is her plotting masterful, Lisa has the rare ability to make you care - passionately - about all her characters... Invisible Girl is quite brilliant in every way.' JANE CASEY

'I loved it. Every damn word.' AJ FINN

'A breathtakingly brilliant novel by an author at the absolute top of her game.' JENNY COLGAN

'Once again, Jewell deliversa story with characters you care about and enough twists to keep you hooked' GOOD HOUSEKEEPING

An up-all-night gripping story with characters who feel as real as you and me. Lisa Jewell is the kind of writer you read twice - once as a breathless reader, to see how the story unfolds, and then again to try to work out how she makes it look so easy. -- Erin Kelly
Really good, gripping. I couldn't bear for it to finish. -- Olivia Colman
I am always reminded of Ruth Rendell at her very best when I read Lisa Jewell. Not only is her plotting masterful, Lisa has the rare ability to make you care - passionately - about all her characters, whether they are important or minor, instantly appealing or apparently monstrous. Invisible Girl is quite brilliant in every way. -- Jane Casey
Dark, gripping, emotionally intense. My heart hurt from being squeezed so tight. -- Tamar Cohen
A breathtakingly brilliant novel by an author at the absolute top of her game. -- Jenny Colgan

Lisa Jewell was born in London. Her first novel, Ralph's Party, was the bestselling debut novel of 1999. Since then she has published another sixteen novels, most recently a number of dark psychological thrillers, including The Girls and Then She Was Gone (both of which were Richard & Judy Book Club picks) as well as I Found You and Watching You. Lisa is a top ten New York Times and number one Sunday Times bestselling author who has been published worldwide in over twenty-five languages. She lives in north London with her husband, two daughters, two cats, two guinea pigs and the best dog in the world.

GOR011099865
Invisible Girl: Discover the bestselling new thriller from the author of The Family Upstairs by Lisa Jewell
Lisa Jewell
Used - Like New
Paperback
Cornerstone
2020-08-04
416
1780899238
9781780899237
N/A
Book picture is for illustrative purposes only, actual binding, cover or edition may vary.
The book has been read, but looks new. The book cover has no visible wear, and the dust jacket is included if applicable. No missing or damaged pages, no tears, possible very minimal creasing, no underlining or highlighting of text, and no writing in the margins.