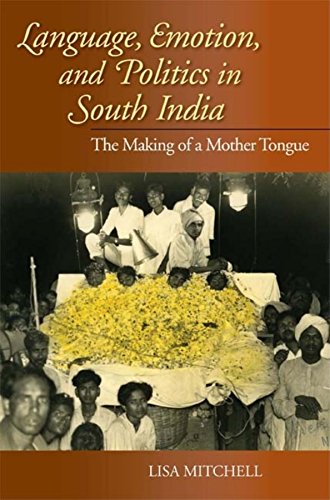 Language, Emotion, and Politics in South India by Lisa Mitchell

What makes someone willing to die, not for a nation, but for a language? In the 1950s and 1960s, southern India saw a wave of dramatic suicides in the name of the Telugu language. This title traces the colonial-era changes in knowledge and practice linked to language that lay behind these events.

Language, Emotion, and Politics in South India: The Making of a Mother Tongue by Lisa Mitchell

What makes someone willing to die, not for a nation, but for a language? In the mid-20th century, southern India saw a wave of dramatic suicides in the name of language. Lisa Mitchell traces the colonial-era changes in knowledge and practice linked to the Telugu language that lay behind some of these events. As identities based on language came to appear natural, the road was paved for the political reorganization of the Indian state along linguistic lines after independence.

[O]riginal and persuasive . . . This lucid and engaging work will appeal to South Asianists as well as to other scholars interested in the history of language and literacy.Dec. 2009

[M]akes a brilliant intervention in the study of language and modernity by critically interrogating the concept of the 'mother tongue' . . . brims with interesting and provocative ideas that extend beyond its immediate focus. . . .a fascinating and ambitious project.Vol. 82, No. 4, 2009

Mitchell's study successfully demonstrates that 'The story of colonial encounters with language in Southern India includes the story of efforts to bring very different sensibilities regarding language into a single frame of discourse'. While colonial restructuring of language contributed significantly to the making of the mother tongues, the fact remains that the resurgence of regional languages and the demand for linguistic states in South India served a powerful impulse-cultural unification and political empowerment of people scattered among arbitrary administrative divisions.Nov 2011

The study subtly identies links that all too often appear lost in the haze of un-critical activism. For that reason, along with its readable and forceful prose, this book makes a lasting contribution to knowledge and offers a valuable addition to any reading list on modern South Asian history.

The aim of 'Language, Emotion, and Politics in South India' is to show how the specific history of Telugu-language politics can shed new light on general questions of importance to researchers in a variety of fields who are concerned to understand the processes that have led speakers of particular languages to see themselves as having a separate history, literature, politics, and identity. . . [An] ambitious and creative work.Feb 2010

Lisa Mitchell is Assistant Professor of Anthropology and History in the Department of South Asia Studies at the University of Pennsylvania.

Acknowledgments
Note on Transliteration and Spelling
Introduction: A New Emotional Commitment to Language
1. From Language of the Land to Language of the People: Geography, Language, and Community in Southern India
2. Making a Subject of Language
3. Making the Local Foreign: Shared Language and History in Southern India
4. From Pandit to Primer: Pedagogy and Its Mediums
5. From the Art of Memory to the Art of Translation: Making Languages Parallel
6. Martyrs in the Name of Language? Death and the Making of Linguistic Passion
Conclusion: Language as a New Foundational Category
Notes
Bibliography
Index

NLS9780253220691
9780253220691
0253220696
Language, Emotion, and Politics in South India: The Making of a Mother Tongue by Lisa Mitchell
Lisa Mitchell
New
Paperback
Indiana University Press
20090318
304
N/A
Book picture is for illustrative purposes only, actual binding, cover or edition may vary.
This is a new book - be the first to read this copy. With untouched pages and a perfect binding, your brand new copy is ready to be opened for the first time
Trustpilot