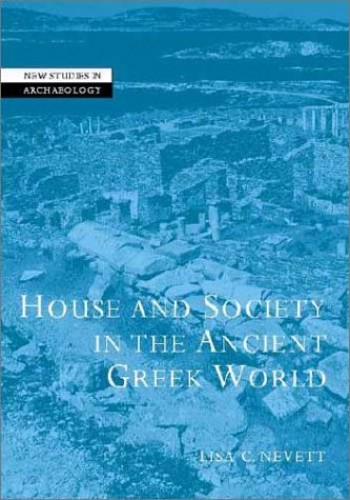 House and Society in the Ancient Greek World
by Lisa Nevett

Out of Stock
$60.99
inc. GST
This 1999 archaeological study considers traditional assumptions about social relationships in Greek households during the Classical and Hellenistic periods. It focuses on the domestic organisation of individual households, gender relations, and their links with outsiders and with the wider social structures of the city state, and how these changed with time.
Very Good
Only 0 left

House and Society in the Ancient Greek World Summary

House and Society in the Ancient Greek World by Lisa Nevett

This 1999 book re-examines traditional assumptions about the nature of social relationships in Greek households during the Classical and Hellenistic periods. Through detailed exploration of archaeological evidence from individual houses, Lisa Nevett identifies a recognisable concept of the citizen household as a social unit, and suggests that this was present in numerous Greek cities. She argues that in such households relations between men and women, traditionally perceived as dominating the domestic environment, should be placed within the wider context of domestic activity. Although gender was an important cultural factor which helped to shape the organisation of the house, this was balanced against other influences, notably the relationship between household members and outsiders. At the same time the role of the household in relation to the wider social structures of the polis, or city state, changed rapidly through time, with the house itself coming to represent an important symbol of personal prestige.

House and Society in the Ancient Greek World Reviews

"Scholarly study of Greek houses, their plans, patterns of organization, functions, and prestige." Stanely Abercrombie, Interior Design
"...welcome volume...stimulating study" David W. J. Gill, University of Wales Swansea, UK
"She does an excellent job of establishing a theoretical framework within which she does a close analysis of some of the material from Olynthos...This is a fine treatment of a difficult subject. Recommended for undergraduate and graduate libraries." Religious Studies Review
"...a source of clarification and wise balance..." Journal of the Society of Architectural Historians

Lisa Nevett is a Lecturer in Classical Studies at The Open University.

Introduction; 1. Domestic space and ancient Greek society; 2. Approaches to the material record; 3. From pots to people: towards a framework for interpreting the archaeological material; 4. The city of Olynthos: a detailed case-study in domestic organisation; 5. Olynthos in context: houses in northern, central and southern Greece and the Aegean Islands; 6. Regional patterns in domestic organisation: Greek houses from Sicily and southern Italy; 7. House and society in the ancient Greek world.

GOR010211881
House and Society in the Ancient Greek World by Lisa Nevett
Lisa Nevett
New Studies in Archaeology
Used - Very Good
Hardback
Cambridge University Press
1999-07-08
234
052164349X
9780521643498
N/A
Book picture is for illustrative purposes only, actual binding, cover or edition may vary.
This is a used book - there is no escaping the fact it has been read by someone else and it will show signs of wear and previous use. Overall we expect it to be in very good condition, but if you are not entirely satisfied please get in touch with us.