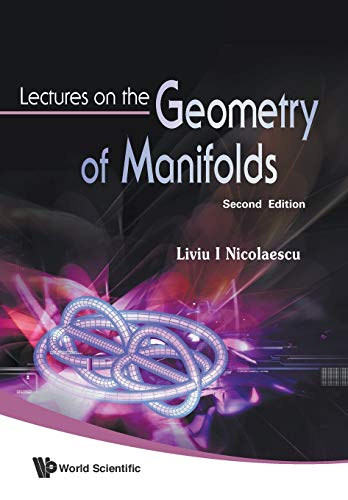 Lectures On The Geometry Of Manifolds (2nd Edition) by Liviu I Nicolaescu (Univ Of Notre Dame, Usa)

Introduces the reader to some of the most frequently used techniques in global geometry. Useful to the graduate student willing to specialize in this field, this book helps in learning the sciences examples that are of more use than precepts.

Lectures On The Geometry Of Manifolds (2nd Edition) by Liviu I Nicolaescu (Univ Of Notre Dame, Usa)

The goal of this book is to introduce the reader to some of the most frequently used techniques in modern global geometry. Suited to the beginning graduate student willing to specialize in this very challenging field, the necessary prerequisite is a good knowledge of several variables calculus, linear algebra and point-set topology.The book's guiding philosophy is, in the words of Newton, that "in learning the sciences examples are of more use than precepts". We support all the new concepts by examples and, whenever possible, we tried to present several facets of the same issue.While we present most of the local aspects of classical differential geometry, the book has a "global and analytical bias". We develop many algebraic-topological techniques in the special context of smooth manifolds such as Poincare duality, Thom isomorphism, intersection theory, characteristic classes and the Gauss-Bonnet theorem.We devoted quite a substantial part of the book to describing the analytic techniques which have played an increasingly important role during the past decades. Thus, the last part of the book discusses elliptic equations, including elliptic Lpand Hoelder estimates, Fredholm theory, spectral theory, Hodge theory, and applications of these. The last chapter is an in-depth investigation of a very special, but fundamental class of elliptic operators, namely, the Dirac type operators.The second edition has many new examples and exercises, and an entirely new chapter on classical integral geometry where we describe some mathematical gems which, undeservedly, seem to have disappeared from the contemporary mathematical limelight.
Manifolds; Natural Constructions on Manifolds; Calculus on Manifolds; Riemannian Geometry; Elements of the Calculus of Variations; The Fundamental Group and Covering Spaces; Cohomology; Characteristic Classes; Classical Integral Geometry Elliptic Equations on Manifolds; Dirac Operators.
NLS9789812778628
9789812778628
9812778624
Lectures On The Geometry Of Manifolds (2nd Edition) by Liviu I Nicolaescu (Univ Of Notre Dame, Usa)
Liviu I Nicolaescu (Univ Of Notre Dame, Usa)
New
Paperback
World Scientific Publishing Co Pte Ltd
2007-10-01
608
N/A
Book picture is for illustrative purposes only, actual binding, cover or edition may vary.
This is a new book - be the first to read this copy. With untouched pages and a perfect binding, your brand new copy is ready to be opened for the first time
Trustpilot