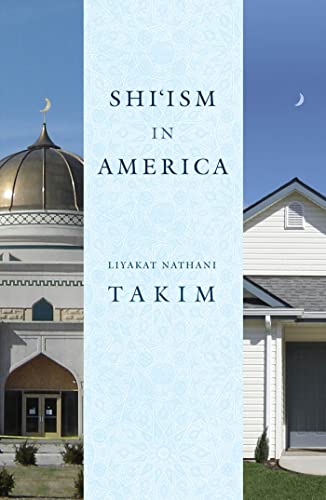 Shi'ism in America
by Liyakat Takim

In Stock
$21.49
+10% GST
The first comprehensive study of Shi'ism in America
Very Good
Only 1 left

Shi'ism in America by Liyakat Takim

Shi'ism in America provides the first general overview of the Shi'i community in America, tracing its history, its current composition, and how Shi'a have negotiated their identity in the American context.
There are over two million Shi'is, who differ from Sunni Muslims in their understandings of the early line of succession after Muhammad, in the United States. With community roots going back sometimes close to one hundred years, Shi'is can be found in major cities like New York, Los Angeles, Chicago, Washington, and Dearborn, Michigan. Early in the century, Shi'is and Sunnis sometimes arrived at the same time, worshipped together, shared similar experiences, and confronted the same challenges despite their sectarian differences.
Both tracing the early history and illuminating the more recent past with surveys and interviews, Takim explores the experiences of this community. Filling an important scholarly gap, he also demonstrates how living in the West has impelled the Shi'i community to grapple with the ways in which Islamic law may respond to the challenges of modernity. Shi'ism in America provides a much-needed overview of the history of this United States religious community, from religious, cultural, and political institutions to inter-group relations, to the experience of African American Shi'is.

A unique and comprehensive study of the life and history of the Shi& i community in North America. . . . It will no doubt stimulate much discussion and investigation of a minority within the Muslim community which continues to play a major role in the political, economic, and social life of todays world. The book is accessible to the interested educated reader and is a must read for academics engaged in research into the place of the Shi& i community in North America and the world. -- Mahmoud Ayoub,author of Islam: Faith and History
Takim, an academic scholar of Islam and a Shi& i religious leader, is perfectly positioned to provide this timely and definitive overview of the diverse American Shi& a community. -- Marcia Hermansen,Loyola University, Chicago
Although less numerous than Sunni Muslims, the new book Shi'ism in America does a good job of showing how the other major branch of Islam is becoming more ethnically diverse, independent from home country leadership and socially active. * Religion Watch *
Offers the first extensive description of a religious community representing up to one-fifth of all American Muslims * CHOICE *
The strength of this book lies in its attention to detail and the retelling of personal accounts...the book is useful for anyone researching Muslim communities and Islam in America. -- Edith Szanto * Comptes Rendes *

Liyakat Nathani Takim is Sharjah Chair in Global Islam at McMaster University in Hamilton, Ontario, Canada. A native of Zanzibar, Tanzania, he is the author of many works, including The Heirs of the Prophet: Charisma and Religious Authority in Shi`ite Islam.

GOR010112131
Shi'ism in America by Liyakat Takim
Liyakat Takim
Used - Very Good
Paperback
New York University Press
2011-09-01
295
0814782973
9780814782972
N/A
Book picture is for illustrative purposes only, actual binding, cover or edition may vary.
This is a used book - there is no escaping the fact it has been read by someone else and it will show signs of wear and previous use. Overall we expect it to be in very good condition, but if you are not entirely satisfied please get in touch with us.