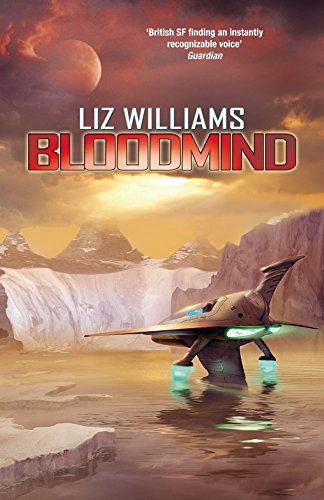 Vali Hallsdottir has returned to her home world of Muspell to discover that her nation is in chaos, preparing to face invasion from the neighbouring country of Darkland. When her friend and mentor Idhunn is brutally murdered and her spine removed and stolen, Vali falls under suspicion and is held by the army of the Morrighanu, but released by a mysterious force.

Having nowhere else to run, she travels across the northern ice field to the hostile glacier territory of Darkland, where she meets an old enemy, Thorn Eld, a member of the elite security force known as the vitki. Eld tells her that Darkland has spawned a rogue assassin, a female vitki killer known as Skinning Knife and despite their differences Vali and Eld decide to join forces and track down the vitki's most lethal weapon. Together they are facing some dangerous questions about the nature of Skinning Knife herself, and her impact on their world . . .and they are not the only ones who are desperate to discover the assassin's whereabouts . . .

`Confirmation, if any were really needed, that Williams is one of the most original and distinctive voices in British SF' SFX

One of the rising stars of British SF, Liz Williams is the daughter of a stage magician and a gothic novelist, and currently lives in Glastonbury. She received a PhD in Philosophy of Science from Cambridge, and her subsequent career has ranged from reading tarot cards on the Palace Pier to teaching in central Asia. Her fifth book, Banner of Souls was nominated for the Philip K Dick Award and the Arthur C Clarke Award.

GOR001634069
Bloodmind by Liz Williams
Liz Williams
Used - Very Good
Paperback
Pan Macmillan
2008-02-15
400
0330442066
9780330442060
N/A
Book picture is for illustrative purposes only, actual binding, cover or edition may vary.
This is a used book - there is no escaping the fact it has been read by someone else and it will show signs of wear and previous use. Overall we expect it to be in very good condition, but if you are not entirely satisfied please get in touch with us.