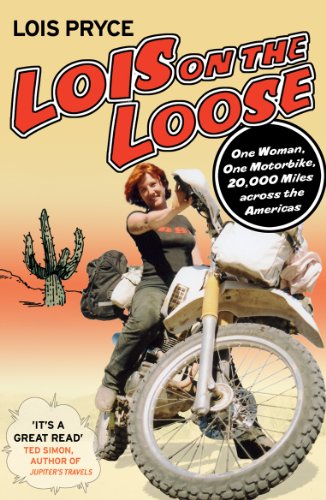 Lois on the Loose
by Lois Pryce

In Stock
$16.49
inc. GST
Young and beautiful, Lois Pryce was a rising star at the BBC. Armed only with the Spanish words for 'caution' and 'cheese', Lois was rather under-prepared for multiple bear sightings, bribing her way through borders, spending a night in a Mexican brothel and crashing her bike in the wilds of Patagonia.
Very Good Good Well Read
21 in stock

Lois on the Loose Summary

Lois on the Loose by Lois Pryce

Young and beautiful, Lois Pryce was a rising star at the BBC. Unbeknownst to her co-workers, Lois lived a parallel life as a biker babe with an overwhelming sense of wanderlust. So she packed in her career to ride her motorcycle on her own from the northernmost tip of Alaska to the southernmost tip of South America. Alone. Armed only with the Spanish words for 'caution' and 'cheese', Lois was rather under-prepared for multiple bear sightings, bribing her way through borders, spending a night in a Mexican brothel and crashing her bike in the wilds of Patagonia. She most certainly got the adventure she craved, and her pulse-pounding, soul-searching adventure has already attracted fans worldwide - a weblog that she kept whilst on her travels was receiving more than two-thousand hits a day. Her hilarious, brilliantly written travelog will appeal to anyone who's ever dreamt of jacking-it-all-in and running away to see the world.

Lois on the Loose Reviews

"Lois makes merry work of a rough road. She knows how to tell a good story, and her light-hearted account almost disguises the grit, the resilience and the brave independence that lay behind her choices. Parts of that long run from Anchorage to Ushaia are really difficult, and she knows that the one bad accident she witnessed could as well have happened to her (as I know it could have happened to me). We all need the gods on our side. It's a great read, and I hope there will be more" -- Ted Simon, author of 'Jupiter's Travels'
"If traveling is a sort of education, then Lois Pryce is now one of the world's most learned adventurers. Her misfortunes, related with wit and good humor, become our fortune, a great tumble of rough gems and gold. Her bike may not be fast, but her account is all speed and joy. Please, Lois, take another trip!" -- Melissa Holbrook Pierson, author of 'The Perfect Vehicle'
"Lois has pulled off a brilliant double whammy; a great travel read and a road trip I'm extremely jealous of" -- Joolz Denby, author of 'Billie Morgan'
"Lighter than Zen and the Art of Motorcycle Maintenance ... A modern day's Jupiter Travels. She writes well, moving lightly over her story with a deft touch and a calm wit. An easy read, and a very 21st century tale" * www.motorcycle.co.uk *
"The narrative roars along at a breakneck pace, and is full of funny asides and snappy accounts - among others - of adventures in a Mexican brothel, camping in Alaska or bribing her way across the numerous borders she crossed" * Sunday Telegraph *

Torn between the career paths of two illustrious relatives, Max Born, the Nobel Prize Winner in Physics and his granddaughter, Olivia Newton-John, Lois Pryce abandoned her interest in Quantum Theory at the age of 16, left school and spent the next couple of years as a carrot picker, painter and decorator and failing an audition as a kiss-o-gram before bowing to the inevitable and going into rock 'n roll. After various underpaid jobs in record shops and as a product manager in the Beeb, she decided to jack it all in and ride her trail bike from Alaska to Tierra del Fuego. Her on-line diary of her journey became a cult hit and led to her first book, Lois on the Loose. She is currently writing her second, about her trip from Tangiers to the Cape of Good Hope. When not on her bike she is at home on her houseboat with husband Austin.

GOR001285478
Lois on the Loose by Lois Pryce
Lois Pryce
Used - Very Good
Paperback
Cornerstone
2007-03-01
368
009949356X
9780099493563
N/A
Book picture is for illustrative purposes only, actual binding, cover or edition may vary.
This is a used book - there is no escaping the fact it has been read by someone else and it will show signs of wear and previous use. Overall we expect it to be in very good condition, but if you are not entirely satisfied please get in touch with us.