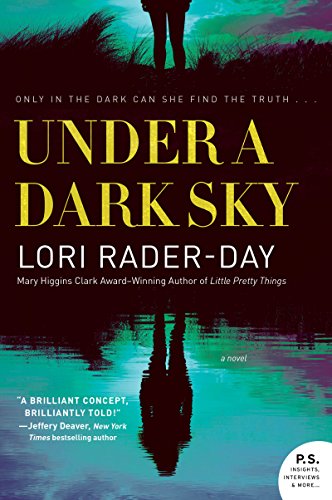 Under a Dark Sky
by Lori Rader-Day

Out of Stock
$17.49
inc. GST
As mishaps continue to befall the group, Eden must make sense of the chaos and lies to evade a ruthless killer-and she'll have to do it before dark falls...
Very Good
Only 0 left

Under a Dark Sky Summary

Under a Dark Sky: A Novel by Lori Rader-Day

Winner of the Anthony Award!

"Fans of Agatha Christie's And Then There Were None will be riveted by Rader-Day's latest psychological thriller, which makes you question who you really know and trust and whether you should be afraid of the dark."-Library Journal, Starred Review

Since her husband died, Eden Wallace's life has diminished down to a tiny pinprick, like a far-off star in the night sky. She doesn't work, has given up on her love of photography, and is so plagued by night terrors that she can't sleep without the lights on. Everyone, including her family, has grown weary of her grief. So when she finds paperwork in her husband's effects indicating that he reserved a week at a dark sky park, she goes. She's ready to shed her fear and return to the living, even if it means facing her paralyzing phobia of the dark.

But when she arrives at the park, the guest suite she thought was a private retreat is teeming with a group of twenty-somethings, all stuck in the orbit of their old college friendships. Horrified that her get-away has been taken over, Eden decides to head home the next day. But then a scream wakes the house in the middle of the night. One of the friends has been murdered. Now everyone-including Eden-is a suspect.

Everyone is keeping secrets, but only one is a murderer. As mishaps continue to befall the group, Eden must make sense of the chaos and lies to evade a ruthless killer-and she'll have to do it before dark falls...

Under a Dark Sky Reviews

"I don't know a writer who captures better the insecurities and damaged and damaging relationships of ordinary women." -- Ann Cleeves, New York Times Bestselling Author
"A brilliant concept, brilliantly told! Under a Dark Sky is a novel that you simply can't put down. Populated by living, breathing characters and filled with fresh prose and sharp dialogue, we thrill to spend a harrowing, yet redemptive, get-away with our wonderful protagonist." -- Jeffery Deaver, New York Times bestselling author
"Lori Rader-Day is a modern-day Agatha Christie: her mysteries are taut, her characters are real and larger than life, and her plots are relentlessly surprising. Under a Dark Sky is a stellar addition to her award-winning catalog... A dynamite late summer read!" -- Kate Moretti, New York Times bestselling author of The Vanishing Year
"Under a Dark Sky by Lori Rader-Day is an atmospheric and absorbing mystery with an intriguing cast of characters. You'll want to read this gripping novel with the lights on." -- Heather Gudenkauf, New York Times bestselling author of The Weight of Silence
"Both an irresistible locked-room puzzler and a finely wrought examination of friendship, love, and loss, this is the kind of book you can't help but read too fast: You can't wait to find out what happened, no matter that you never want it to end." -- Elizabeth Little, author of Dear Daughter
"With a delicate yet steady hand, Lori Rader-Day traces the lines that join these old friends together and the barriers that divide them, to reveal a constellation as inevitable as it's astonishing. Splendid stuff from a master of the genre. " -- Catriona McPherson, author of Go to My Grave
"Fans of Agatha Christie's And Then There Were None will be riveted by Rader-Day's (The Day I Died) latest psychological thriller, which makes you question who you really know and trust and whether you should be afraid of the dark." -- Library Journal (starred review)
"A dark sky park where even the slightest glimmer of light is blocked out provides a fascinating backdrop for Lori Rader-Day's inventive fourth novel. ... A shrewd plot and realistic characters also soar in Under a Dark Sky." -- Associated Press
Praise for The Day I Died: "Mary Higgins Clark Award winner Rader-Day's (Little Pretty Things) third novel will thrill readers who can't get enough of the psychological suspense genre." -- Library Journal
Praise for The Day I Died: "Lori Rader-Day is so ferociously talented that it kind of makes me mad. Not fair! The Day I Died is a terrific novel-gripping and twisty and beautifully layered. It kept me locked up and locked in from the very first word to the very last." -- Lou Berney, Edgar Award-winning author of The Long and Faraway Gone
Praise for The Day I Died: "Beautiful prose and tack-sharp observations round out this slow-burning but thought-provoking meditation on the ravages of domestic violence." -- Publishers Weekly
Praise for The Day I Died: "Secrets lie behind every loop, slant, and swirl of The Day I Died, Lori Rader-Day's compelling story of a handwriting analyst searching for a lost boy. Richly written, complex, and imaginative...this is a perfect read for fans of Mary Higgins Clark." -- Susanna Calkins, Macavity Award-winning author of the Lucy Campion mysteries
Praise for The Day I Died: "An unusual protagonist, a timely crime, and outstanding writing make Lori Rader-Day's The Black Hour a stand-out debut." -- Sara Paretsky, New York Times bestselling author
Praise for The Day I Died: "An exceptional debut...An irresistible combination of menace, betrayal, and self-discovery." -- Publishers Weekly (starred review)
Praise for The Day I Died: "A searing, psychological suspense novel about small-town dreams shattered by a deadly secret." -- Terry Shames, Macavity Award-winning author of A Killing at Cotton Hill
Praise for The Black Hour: "Addictive.... A perfect thriller for the summer." -- BookPage

Lori Rader-Day is the author of Under a Dark Sky, The Day I Died, Little Pretty Things, and The Black Hour. She is a three-time Mary Higgins Clark Award nominee, winning the award in 2016. Lori lives in Chicago.

GOR010315438
Under a Dark Sky: A Novel by Lori Rader-Day
Lori Rader-Day
Used - Very Good
Paperback
HarperCollins Publishers Inc
2018-06-14
288
0062560301
9780062560308
N/A
Book picture is for illustrative purposes only, actual binding, cover or edition may vary.
This is a used book - there is no escaping the fact it has been read by someone else and it will show signs of wear and previous use. Overall we expect it to be in very good condition, but if you are not entirely satisfied please get in touch with us.