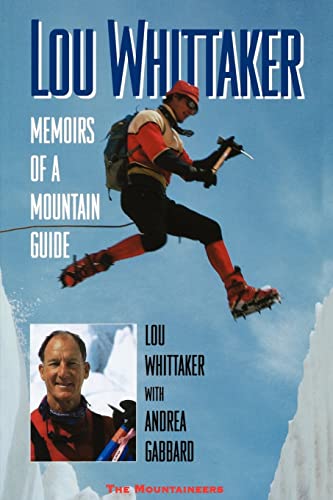 "Everything I know, everything I believe in, I've learned from the mountains, " says Lou Whittaker. This comes as no surprise when you realize that he has probably spent more time on mountains than off. One of America's most respected climbers for more than four decades, Lou Whittaker began his illustrious mountaineering career as a teenager in the Pacific Northwest, climbing insatiably in the Olympic and Cascade mountains with his twin brother, Jim. He stepped naturally into coveted spots on expeditions to formidable peaks in Alaska, the Himalaya, and the Karakorum, and went on to lead the expedition that made the first American ascent of the North Col on Everest in 1984. To Northwesterners, Lou's name is synonymous with Mount Rainier, where he has guided thousands to its summit since his own first ascent of the mountain at age nineteen. In Lou Whittaker, Lou is at his storytelling best as he shares adventures and wisdom honed from the wild times of his youth to his more recent climbs with some of the country's best mountaineers. Tales of life as a young mountain rescuer, and later as mentor to others, are filled with his trademark humor, boundless energy, and compassion. He weaves his simple and practical philosophy through recollections of climbing with family, friends, and a host of fellow mountaineers, including Jim Wickwire, Pete Schoening, John Roskelley, Joe Kennedy, Jr., Peter Whittaker, and Willi Unsoeld. He recounts amazing episodes on K2, Kangchenjunga, and on Mount McKinley, where he participated in one of the most spectacular rescues on record, and replays adventures from his guiding days on his beloved Mount Rainier. Especially poignant are his memories of teammate MartyHoey, a promising and well-liked young climber who died on the 1982 expedition to Everest. Evident and inspiring throughout these stories are his love for climbing and for life - even amidst such losses. Lou finds great meaning in these words from William O. Douglas: "The struggle

A great and very human story from a fine mountaineer and guide who has lived his life in the mountains and given so much back to all of us.--Chris Bonington, climber and author
This account of Lou Whittaker's climbing experiences is a remarkable blend of wisdom, compassion, humor, and marvelous story-telling. He truly is a larger-than-life figure, much like those memorable characters in the Robert Service poems he is so fond of reciting.--Jim Wickwire, altitude climber

GOR003416990
Lou Whittaker: Memoirs of a Mountain Guide by Lou Whittaker
Lou Whittaker
Used - Very Good
Paperback
Mountaineers Books
1995-07-31
264
0898864593
9780898864595
N/A
Book picture is for illustrative purposes only, actual binding, cover or edition may vary.
This is a used book - there is no escaping the fact it has been read by someone else and it will show signs of wear and previous use. Overall we expect it to be in very good condition, but if you are not entirely satisfied please get in touch with us.