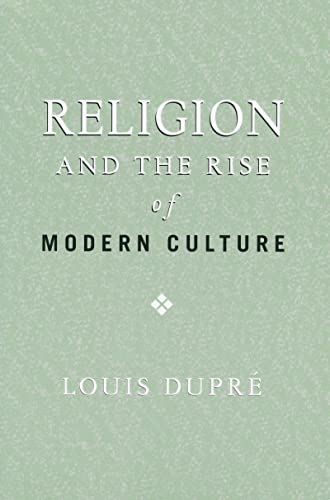 Religion and the Rise of Modern Culture by Louis Dupre

Describes and analyzes changing attitudes toward religion during three stages of modern European culture: the Renaissance, the Enlightenment, and the Romantic period. This guide traces the weakening of the Christian synthesis. It is based on the Erasmus Lectures he delivered at the University of Notre Dame in 2005.

Religion and the Rise of Modern Culture by Louis Dupre

Religion and the Rise of Modern Culture describes and analyzes changing attitudes toward religion during three stages of modern European culture: the Renaissance, the Enlightenment, and the Romantic period. Louis Dupre is an expert guide to the complex historical and intellectual relation between religion and modern culture.Dupre begins by tracing the weakening of the Christian synthesis. At the end of the Middle Ages intellectual attitudes toward religion began to change. Theology, once the dominant science that had integrated all others, lost its commanding position. After the French Revolution, religion once again played a role in intellectual life, but not as the dominant force. Religion became transformed by intellectual and moral principles conceived independently of faith. Dupre explores this new situation in three areas: the literature of Romanticism (illustrated by Goethe, Schiller, and Hoelderlin); idealist philosophy (Schelling); and theology itself (Schleiermacher and Kierkegaard). Dupre argues that contemporary religion has not yet met the challenge presented by Romantic thought.Dupre's elegant and incisive book, based on the Erasmus Lectures he delivered at the University of Notre Dame in 2005, will challenge anyone interested in religion and the philosophy of culture.
"Dupre's splendid new book traces the unraveling of the onto-theological synthesis of medieval Christendom through the Renaissance, the Enlightenment, and German Romanticism. . . . With magisterial lucidity Dupre explores the fragmentation of the medieval symbolic world culminating in the apotheosis of the self-constituting subject." -- Theological Studies
"This beautifully crafted essay by Louis Dupre makes an original contribution to our understanding of the emergence and development of modernity, which dispensing with religion as a governing discourse and form of life, nonetheless attempts to find a place for it in a world sufficiently depleted of meaning and value as to require reenchantment. It supplements Dupre's two magisterial texts on the topic of the modernity covering the Renaissance and Enlightenment periods, and whets the appetite for the forthcoming volume on Romanticism. Deep learning is worn lightly in this marvelously readable book." -- Cyril O'Regan, University of Notre Dame
"This wonderful little book . . . narrates the development of modern culture from its roots in early Christian encounters with Aristotelianism, through the Renaissance, the Enlightenment, the rise of modern atheism, and on to the poetry, philosophy, and theology of the German Romantics. . . . Dupre argues that the weakening of the 'Christian synthesis'-and the subsequent decline of religion into subsidiary roles in public and academic life-began with a series of intellectual shifts that can be traced to Christianity's earliest days." -- Commonweal
"The title of this book, broad as it is, aptly describes it. As the author puts it, for over a millenium Western culture was the culture of Christianity. But gradually, beginning in the Middle Ages, culture and religion 'assumed a certain independence vis-a-vis each other' and with the Enlightenment this turned to opposition. In the lectures which constitute this book, the author traces this development." -- Catholic Library World
"The writing is measured, lucid and graceful, and the breadth of scholarship and the easy and comprehensive familiarity of the author with his material is inspiring. Dupre here distills key themes in his thinking on religion, modernity and culture into a single slim volume, making this a useful introduction to his writings at a modest price." -- Theology
"A stunning synthesis of Dupre's magisterial intellectual history of modernity and his distinctive and important philosophy of religion." -- David Tracy, emeritus, The University of Chicago Divinity School
"Louis Dupre's reflections on the development of history towards modernity are a model of careful scholarship and insight. His short book is a distillation and refinement of many years of careful research and serious writing on questions of the philosophy of religion and cultural history. . . . Dupre gives us a comprehensive, serene, and learned discussion of a variety of themes which can only deepen and enrich our understanding of the large complex of questions connected with the themes of modernity, culture, and religion." -- The Thomist
"Louis Dupre's literate and sweeping review of the fate of religious faith in modern culture will help contemporary readers, who share his closing yearning for ways in which 'transcendence can be recognized again,' to appreciate why many of us find a postmodern climate-for better or worse-more conducive to fulfilling that desire. For his dramatic depictions of modernity teach us how different is the culture in which we now live." -- David Burrell, CSC, Hesburgh Professor Emeritus in Philosophy and Theology, University of Notre Dame
Louis Dupre is T. Lawrason Riggs Professor Emeritus in Religious Studies at Yale University. He has published numerous books and articles, including The Other Dimension and The Transcendent Selfhood.
NLS9780268025946
9780268025946
0268025940
Religion and the Rise of Modern Culture by Louis Dupre
Louis Dupre
New
Paperback
University of Notre Dame Press
2008-03-01
136
N/A
Book picture is for illustrative purposes only, actual binding, cover or edition may vary.
This is a new book - be the first to read this copy. With untouched pages and a perfect binding, your brand new copy is ready to be opened for the first time
Trustpilot