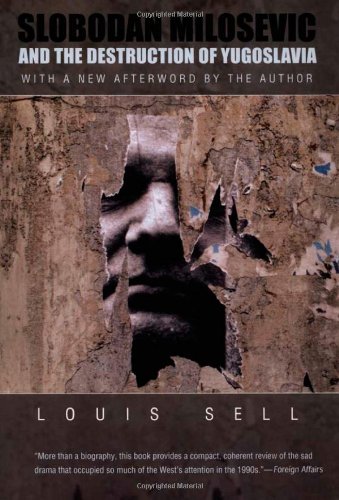 Slobodan Milosevic and the Destruction of Yugoslavia
by Louis Sell

Slobodan Milosevic and the Destruction of Yugoslavia Summary

Slobodan Milosevic and the Destruction of Yugoslavia by Louis Sell

In Slobodan Milosevic and the Destruction of Yugoslavia former U.S. foreign service officer Louis Sell fills a gap in the literature on the Yugoslav conflicts by covering both the domestic Yugoslav side of the collapse and the history and consequences of international interventions in the wars in Slovenia and Croatia in 1991, Bosnia in 1992-1995, and Kosovo from 1998-1999. Sell focuses on the life and career of Milosevic, from the perspective of both a diplomatic insider intimately familiar with the region and a scholar who has researched all the available English and Serbo-Croatian sources.
Sell spent much of his diplomatic career in Eastern Europe and Russia, including eight years in Yugoslavia between 1974 and 2000, and witnessed the events that contributed to the dissolution and ultimate destruction of Yugoslavia. In Slobodan Milosevic and the Destruction of Yugoslavia he provides first-hand observations of Milosevic from the heady days of his rise to power and, later, in the endgame of the Bosnian war, including the Dayton Peace Conference. Drawing on a wide range of published material as well as interviews with Yugoslav and foreign participants, Sell covers such areas as Milosevic's relationship to the military, his responsibility for war crimes, his methods of persuasion and negotiation, and his notoriously explosive personality.

Slobodan Milosevic and the Destruction of Yugoslavia Reviews

"It will be decades until someone can begin to write a history of the Balkans conflicts of the last decade of the twentieth century. Until then, few accounts will be more valuable than Louis Sell's first-hand account of the twelve years of Slobodan Milosevic from his conversion to nationalism in Kosovo to his transfer to the International Tribunal in The Hague. As very few others, Sell has been on the different scenes of the conflicts, met the different actors, seen the drama from different perspectives, and been able to put the pieces together. He has written a highly readable and most interesting book."-Carl Bildt, former Prime Minister of Sweden and High Representative for Bosnian Peace
"Sell is authoritative on Milosevic's fall from power. . . . [He] clearly knows the territory." -- Mary H. Meier * Boston Globe *
"Louis Sell brings to his fascinating study of the Serbian tyrant a deep experience in the Balkans, an authority based on his own participation in some of the events he describes, and a keen analytical eye. This is a first-rate book."-Warren Zimmermann, United States Ambassador to Yugoslavia, 1989-1992
"More than a biography, this book provides a compact, coherent review of the sad drama that occupied so much of the West's attention in the 1990s." * Foreign Affairs *
"Louis Sell systematically maps the rise and fall of Slobodan Milosevic in the first comprehensive biography of the man seen as most responsible for the violent disintegration of former Yugoslavia. Armed with years of experience as a diplomat and analyst of the Balkans, Sell has written a scholarly and compelling account about Slobodan Milosevic. It is an important work that merits attention from anyone who wants to understand the nature of Slobodan Milosevic's disastrous rule."-Laura Silber, author of The Death of Yugoslavia
"The war crimes trial of former Yugoslav president Slobodan Milosevic . . . makes this political biography especially timely. . . . [V]aluable for its background on the current trial and coverage of recent history of a troubled region. Recommended for most libraries." * Library Journal *
"Sell . . . offer[s] a shrewd assessment of the former dictator." -- Dusko Doder * The Nation *
"[C]ompelling. . . . Sell's account, based on both the public record and interviews with many of the principals as well as his personal experiences, offers an impressive yield of telling insights and revealing anecdotes." -- Andrew Nagorski * Washington Post *
"Sell, a former U.S. foreign service officer with many years of service in the Balkans, maintains the detached, objective style that has become appropriate for the anatomization of a criminal. . . . [Slobodan Milosevic and the Destruction of Yugoslavia] is the better for being written by someone with an educated sympathy for both the Serbs and, as they were once known, the Yugoslavs. . . . A strikingly useful aspect of this book is the detail it gives, often at first hand, about the shameful vacillations-to put it no higher-of the Western mediators." -- Christopher Hitchens * Wilson Quarterly *
"Sell's book is certainly the most comprehensive and up-to-date on both Milosevic and, as his subtitle suggests, the destruction of Yugoslavia. It is detailed and well sourced . . . Sell's hefty tome will be a major work of reference for many years to come." -- Tim Judah * Survival *
"Louis Sell's study is a . . . substantial book. . . . His is the most comprehensive and up-to-date account of the war so far published in English. He is fair-minded and keeps his diplomatic cool until the end, when with justice he calls Mr. Milosevic 'an ugly killer' who even now denies the fact of horrendous crimes, and his own responsibility for them." * The Economist *
"[R]iveting. . . ." -- Ian Traynor * The Guardian *
"A welcome biography of the 'Butcher of the Balkans' [and] . . . an important contribution to the literature surrounding the disintegration of Yugoslavia and the ethnic wars that followed." * Kirkus Reviews *
"The great strength of Slobodan Milosevic and the Destruction of Yugoslavia is that it is written with internal as well as external knowledge. Sell's service as a diplomat makes him familiar with the external factors, and has given him contact with sources of information denied to the routine enquirer. . . . Sell adds his extensive internal knowledge of Yugoslavia, a knowledge gained in the service of NGOs as well as the US State Department. This and his fluency in Serbo-Croat, gave him, as his footnotes show, access to publications and personalities not always available to those imposing policy from without. It is this combination which enables Sell to tell us a good deal not only about the murderer and his wife, but also about their victim, Yugoslavia. . . . Sell has produced a book which will be valued by students of Yugoslavia and will be an excellent introduction to those not yet familiar with that country's tragic destruction." -- Richard Crampton * TLS *
"[A] useful and also highly readable addition to our ever-growing shelf of scholarly studies. . . . [An] excellent book." -- Dennison Rusinow * Slavic Review *

Louis Sell is a retired Foreign Service Officer who served twenty-eight years with the U.S. Department of State. He spent eight years in the former Yugoslavia with both the Department of State and non-governmental organizations. From 1995-1996 he served as Political Deputy to the first High Representative for Bosnian Peace Implementation. In that capacity, Sell attended the Dayton Peace Conference and participated in the first year of implementation of the Dayton accords. In 2000 he served as Kosovo Director of the International Crisis Group. He currently teaches at the University of Maine at Farmington.

GOR010756970
Slobodan Milosevic and the Destruction of Yugoslavia by Louis Sell
Louis Sell
Used - Very Good
Hardback
Duke University Press
2002-02-22
432
0822328550
9780822328551
N/A
Book picture is for illustrative purposes only, actual binding, cover or edition may vary.
This is a used book - there is no escaping the fact it has been read by someone else and it will show signs of wear and previous use. Overall we expect it to be in very good condition, but if you are not entirely satisfied please get in touch with us.