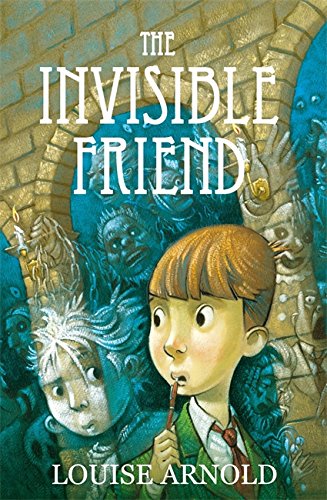 In Stock
$9.99
+10% GST
Grey Arthur is a ghost. Not a chain-rattling, dramatic-wailing type of ghost. He's a hazy, grey and not very ghost-like at all. Discover what happens to him in this funny first novel by new talent Louise Arnold, when he decides to become lonely Tom's Invisible Friend ...
Very Good Good
7 in stock

Grey Arthur is a very normal ghost. Too normal for his own liking. He's so normal he doesn't even know what group he belongs to: not scary enough to be a Screamer, or naughty enough to be a Poltergeist ... each different thing Arthur tries to be, he fails.

One afternoon, when Grey Arthur is thinking very despondantly how unfair life is, he senses the exact same emotion coming from a boy far away. And as he follows his instincts he reaches Tom's house.

Tom is a very normal boy, with brown hair and brown eyes and normal parents. But somehow people at school don't seem to think that. He doesn't fit in. People call him weird.

When Grey Arthur senses Tom's unhappiness he realises they're not so different after all. He doesn't feel he fits in with the other ghosts, either; and that is when he realises what he is going to be. He's going to be Tom's official Invisible Friend and help him solve his problems.

This is neither an issue-led story nor a piece of frivolous frippery. Funny, moving and with no neat answers, it's very nicely done. * The Guardian Look at a Book *
Touching, funny and beautifully written debut * Betty Bookmark *
A fresh, imaginative story about a very unusual friendship * Young Post *
A delightful debut novel * Writing Magazine *
'The tale proceeds helter-skelter, funny, shrewd, sometimes moving, to one of those satisfying climaxes which indicates a good plot well crafted.' * Carousel *

Louise Arnold was born in Morden, Surrey. Her love of writing began at the age of four when she wrote her first poem. From the age of eight she lived in Bognor Regis until passing her A-Levels. Louise took a year out before university and back-packed, Amtrak'ed and GreyHound-ed across America. She graduated in 2003, from the University of Kent, with a 2.1 in drama (specialising in Stand-Up Comedy) and has now settled in Canterbury with her partner. Her spare time is taken up with a love of e-bay and carboot sales, changing the colour of her hair, and borrowing the neighbour's cat until she can buy her own Siamese. Grey Arthur: The Invisible Friend is her first novel.

GOR002817136
Invisible Friend by Louise Arnold
Louise Arnold
The Invisible Friend
Used - Very Good
Paperback
Hachette Children's Group
2005-07-14
288
0340892978
9780340892978
N/A
Book picture is for illustrative purposes only, actual binding, cover or edition may vary.
This is a used book - there is no escaping the fact it has been read by someone else and it will show signs of wear and previous use. Overall we expect it to be in very good condition, but if you are not entirely satisfied please get in touch with us.