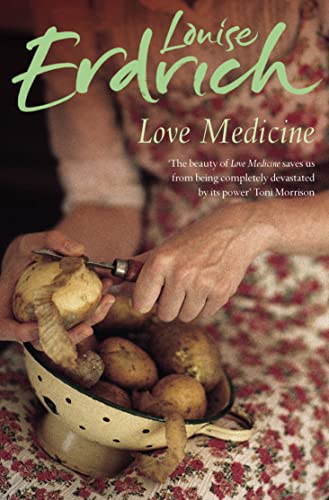 Beautiful reissue of Louise Erdrich's most famous novel, from one of the most celebrated American writers of her generation and winner of the National Book Award 2012.

Beautiful reissue of Louise Erdrich's most famous novel, from one of the most celebrated American writers of her generation and winner of the National Book Award 2012.

Set on and around a North Dakota reservation, `Love Medicine' tells the story of the Lamartines and the Kashpaws - two extraordinary families whose fates are united and sustained in a harsh world by the strength and diversity of their love.

We meet the sensual Lulu Lamartine, whose children have different fathers, but whose passionate tie to her first love, Nector Kashpaw, intensifies over the years; June Kashpaw, who froze to death in a snowstorm; and the philosophical Lipsha Morrissey, June's abandoned son, who makes a love medicine to keep his grandparents together.

Greeted with great critical acclaim when first published in 1984, 'Love Medicine' won the US National Book Critics' Circle Award. Louise Erdrich has now substantially revised and expanded the novel for this edition, to complement its companion novels, 'The Beet Queen, `Tracks' and 'The Bingo Palace'.

`A masterpiece, written with spellbinding authenticity and animated by a spirited comic energy.' Philip Roth

'The beauty of `Love Medicine' saves us from being completely devastated by its power.' Toni Morrison

'A powerful piece of work ... Louise Erdrich is the rarest kind of writer, as compassionate as she is sharp-sighted.' Anne Tyler

'The impression is of a river of memory bursting its banks and overflowing upon the page in an irresistible flood.' Angela Carter

'Erdrich presents a variety of voices: each forceful in its own way, each adding a different dimension - cruel, sombre, humorous - to what is cumulously a wondrous prose song ... `Love Medicine' is finally about the enduring verities of loving and surviving, and these truths are revealed in a narrative that is an invigorating mixture of the cosmic and the tragic.' New York Times

Louise Erdrich is one of the most gifted, prolific, and challenging of American novelists. Her fiction reflects aspects of her mixed heritage: German through her father, and French and Ojibwa through her mother. She is the author of many novels, the first of which, Love Medicine, won the National Book Critics Circle Award and the last of which, The Round House, won the National Book Award for Fiction in 2012. She lives in Minnesota.
GOR001524451
9780006546191
0006546196
Love Medicine by Louise Erdrich
Louise Erdrich
Used - Very Good
Paperback
HarperCollins Publishers
1994-09-07
400
N/A
Book picture is for illustrative purposes only, actual binding, cover or edition may vary.
This is a used book - there is no escaping the fact it has been read by someone else and it will show signs of wear and previous use. Overall we expect it to be in very good condition, but if you are not entirely satisfied please get in touch with us
Trustpilot