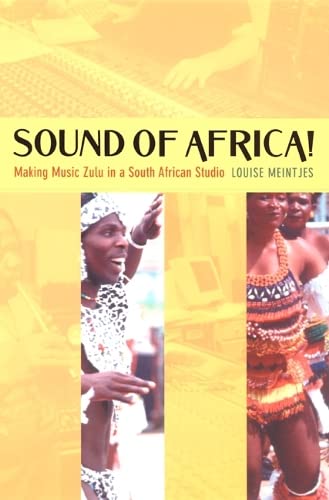 Sound of Africa! by Louise Meintjes

Gives an account of the production of a mbaqanga album in a recording studio in Johannesburg. This work analyzes how the politics surrounding Zulu ethnic nationalism impacted mbaqanga artists' decisions of the studio. It explores how the global consumption of Afropop and African images fed back into mbaqanga during the recording process.

Boosting the bass guitar, blending the vocals, overdubbing percussion while fretting over shoot-outs in the street. Grumbling about a producer, teasing a white engineer, challenging an artist to feel his African beat. Sound of Africa! is a riveting account of the production of a mbaqanga album in a state-of-the-art recording studio in Johannesburg. Made popular internationally by Mahlathini and the Mahotella Queens, mbaqanga's distinctive style features a bass solo voice and soaring harmonies of a female frontline over electric guitar, bass, keyboard, and drumset. Louise Meintjes chronicles the recording and mixing of an album by Izintombi Zesimanje, historically the rival group of the Mahotella Queens. Set in the early 1990s during South Africa's tumultuous transition from apartheid to democratic rule, Sound of Africa! offers a rare portrait of the music recording process. It tracks the nuanced interplay among South African state controls, the music industry's transnational drive, and the mbaqanga artists' struggles for political, professional, and personal voice.

Focusing on the ways artists, producers, and sound engineers collaborate in the studio control room, Meintjes reveals not only how particular mbaqanga sounds are shaped technically, but also how egos and artistic sensibilities and race and ethnicity influence the mix. She analyzes how the turbulent identity politics surrounding Zulu ethnic nationalism impacted mbaqanga artists' decisions in and out of the studio. Conversely, she explores how the global consumption of Afropop and African images fed back into mbaqanga during the recording process. Meintjes is especially attentive to the ways the emotive qualities of timbre (sound quality or tone color) forge complex connections between aesthetic practices and political ideology. Vivid photos by the internationally renowned photographer TJ Lemon further dramatize Meintjes' ethnography.

"What fun it was reading Louise Meintjes's Sound of Africa! It's an amazing work, almost magical at moments. I know of no other account in print of life in a sound studio. That Meintjes also takes on contemporary South Africa, questions of ethnic and national identity, and world culture and provides an entree into current ethnomusicological thinking is all the more remarkable."-John F. Szwed, author of Space Is the Place: The Lives and Times of Sun Ra
"Louise Meintjes's Sound of Africa! is a very in-depth but philosophical look at how the common thread of music brings African traditions and culture and modern western technology together across the stormy backdrop of South African politics."-John Lindemann, recording engineer, Big Ears Music c.c., South Africa
"Well researched and unbiased, Sound of Africa! is an authentic account of three decades of South African music-live and in the studio. It stands as a testimony to the changing struggles and constant inventiveness of South Africa's producers, musicians, and engineers who worked in the music industry during apartheid."-Koloi Lebona, record producer and Zomba label manager, South Africa
"Sound of Africa!, the first serious study of musicmaking in an African recording studio, is a pathbreaking contribution to the scholarly literature on popular music. Louise Meintjes's research demonstrates, in the most specific terms, that the 'production' of popular music is a complex, multistranded process, penetrated by economic and aesthetic considerations, identity politics writ large and small, and the global traffic in cultural forms and technologies."-Christopher Waterman, author of Juju: A Social History and Ethnography of an African Popular Music
"A lively and distinctive book. . . . A highly readable account that will appeal to those who have ever tapped their feeet to this irresistible 'township' music and will compel those who have not to seek it out. Enthusiastically recommended. . . ." * Library Journal *
"Meintjes' book offers perceptive descriptions. . . . An unflinching account of how the media became entangled with the country's ethnic violence during the 1990s." -- Aaron Cohen * DownBeat *
"A major and uniquely different contribution to the body of scholarship on South African popular music. . . . A valuable contribution to the literature exploring the intersection between identity, technology, and aesthetics in various black musics. . . ." -- Michael E. Veal * Ethnomusicology *
"A strikingly novel and compelling narrative. . . . informative, empirically sound, and engaging." -- Veit Erlmann * American Ethnologist *
"A wonderfully rich and highly contextualized study of one point in the constellation of processes that are coming together to define what it can mean to be South African today: a music studio in Johannesburg. . . . Louise Meintjes offers a compelling portrait-soundscape?-of how recording and producing music is intimately connected to the production of Zulu-ness and African-ness, both within South Africa and within the increasingly vibrant circuits of world music marketing and recording. It should serve as a model for further research on the intersections of music making, technology, and the mediation of identity." -- Jonathan H. Shannon * American Anthropologist *

Louise Meintjes is Assistant Professor of Ethnomusicology at Duke University.

Index 319
Illustrations ix
Notes to the Reader xi
Acknowledgments xiii
Demo Tape: About Sound of Africa! 1
Cut 1. Mbaqanga 19
Cut 2. The Recording Studio as Fetish 71
Cut 3. Producing Liveness 109
Cut 4. Sounding Figures 146
Cut 5. Performing Zuluness 174
Cut 6. Imagining Overseas 217
A Final Mix: Mediating Difference 250
Print-Through 263
Notes 267
Glossary 291
Bibliography 297
Discography 313
GOR007564852
9780822330141
0822330148
Sound of Africa!: Making Music Zulu in a South African Studio by Louise Meintjes
Louise Meintjes
Used - Very Good
Paperback
Duke University Press
2003-02-05
352
N/A
Book picture is for illustrative purposes only, actual binding, cover or edition may vary.
This is a used book - there is no escaping the fact it has been read by someone else and it will show signs of wear and previous use. Overall we expect it to be in very good condition, but if you are not entirely satisfied please get in touch with us
Trustpilot