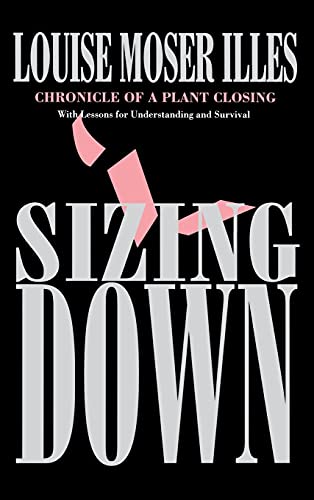 Sizing Down
by Louise Moser Illes

In January 1992, human resources manager Louise Moser Illes was notified, along with nine hundred co-workers, that the semiconductor plant where she worked would be closed by the end of the year.

Sizing Down: Chronicle of a Plant Closing by Louise Moser Illes

In January 1992, human resources manager Louise Moser Illes was notified, along with nine hundred co-workers, that the semiconductor plant where she worked would be closed by the end of the year. A month later, she began to document the process that she helped carry out and that left her without a job.

Closing a plant takes a heavy toll on the employees, the community, and the company management. While much has been written about the effects of plant shutdowns in the past three decades, Sizing Down is one of the first studies of the process itself. Illes uses her paradoxical perspective as a victim of downsizing charged with its orchestration to examine every phase of the shutdown and to draw out the constructive lessons that can be learned from the experience. What she learned at the Signetics semiconductor plant in Orem, Utah, has relevance for people caught in any reduction of personnel and facilities.

From the compelling stories of how individual employees responded and her own observations of the parent company, Illes teases out the most effective strategies to sustain worker morale. How did employees regain equilibrium in their working lives? Which management decisions helped retain the company's essential human resources and contributed to its overall financial health? What were the minor problems that went unnoticed until they grew difficult to manage? Illes includes an appendix of the questions asked of workers and managers, suggesting guidelines to minimize the disasters of sizing down.

"The strength of Illes's book is the... summary at the end of each chapter. She gives suggestions on how managers involved in future plant closings can learn from the Signetics experience."

"An instructive look at what problems to anticipate and how to minimize the traumatic effects of job loss."

"As a slice of history, docudrama and how-to manual, Sizing Down is top-notch. Illes was human resources manager at the Signetics semiconductor plant in Orem, Utah, when, in January 1992, she was notified that the plant would close at the end of the year. It became her task to assist with orchestrating the phase-out of 900 jobs, including her own.... Throughout the inevitable juggling of interests, judgments had to be made, some good, some bad, says the author. This relentlessly objective history records them all, along with afterthoughts on how the situation might have been handled better."

GOR010232670
Sizing Down: Chronicle of a Plant Closing by Louise Moser Illes
Louise Moser Illes
Used - Good
Hardback
Cornell University Press
1996-02-01
240
0875463517
9780875463513
N/A
Book picture is for illustrative purposes only, actual binding, cover or edition may vary.
The book has been read but remains in clean condition. All pages are intact and the cover is intact. Some minor wear to the spine.