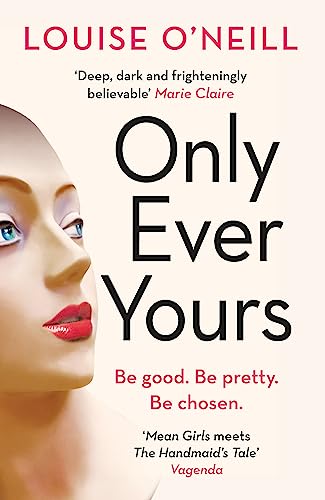 Only Ever Yours
by Louise O'Neill

Used Price
$16.99
inc. GST
Free Shipping in Australia
If you're a girl, all that matters is that you are beautiful . . . The brilliant, bestselling first novel by Louise O'Neill, author of Asking for It
Reviews:
Trustpilot
Very Good Good Well Read

Only Ever Yours Summary

Only Ever Yours by Louise O'Neill

The bestselling novel about beauty, body image and betrayal

All their lives, the eves have been waiting. Now, they are ready for the outside world.
companion . . . concubine . . . or chastity
Only the best will be chosen.
And only the Men decide.

Customer Reviews - Only Ever Yours

Only Ever Yours Reviews

Gripping ... like all the best dystopias, Only Ever Yours is about the world we live in now * Irish Times *
The Handmaid's Tale meets Mean Girls' * The Vagenda *
Utterly magnificent ... gripping, accomplished and dark * Marian Keyes *
Deserves to be read by young and old, male and female, the world over in the same way Harry Potter and The Hunger Games were * Sunday Independent *
A dark dream. A vivid nightmare. The world O'Neill imagines is frightening because it could come true. She writes with a scalpel * Jeanette Winterson *
Deep, dark and frighteningly believable, this book will stay with you for a long time * Marie Claire *
Compelling writing ... this only-too-real dystopia grips from beginning to end * SFX *
Margaret Atwood's The Handmaid's Tale with a post-millennial twist * The Journal.ie *
The bleakness of The Catcher in the Rye, the satire of The Stepford Wives and it made me recall Nineteen Eighty-Four ... a fresh and original talent * Irish Independent *
Terrifying but captivating * Company *
A sparkling debut that will really make you think * Heat *
'Compelling and frightening' * Irish Examiner *
An ingenious exploration of gender roles, female identity and female competition * Buzzfeed *
'Terrifying and heartbreaking, O'Neill's story reads like an heir to Margaret Atwood's The Handmaid's Tale and MT Anderson's Feed, and, like those two books, it's sure to be discussed for years to come' * Publisher's Weekly *
'A stunning debut set in a dystopian future that has everyone talking . . . once read, will never be forgotten' * Irish Independent *
Dark, gripping . . . should be mandatory reading everywhere * The F Word *

Louise O'Neill is the feminist powerhouse and outspoken voice for change whose novels Only Ever Yours and Asking for It helped to start important conversations about body image and consent. Asking for It won Book of the Year at the Irish Book Awards 2015 and stayed in the Irish Top Ten fiction chart for over a year. Only Ever Yours won Newcomer of the Year at the Irish Book Awards and the Bookseller YA Prize. Film/TV rights have been optioned on both books. Louise lives and works in West Cork, Ireland. She contributes regularly to Irish TV and radio, and has a weekly column in the Irish Examiner.

GOR006738002
Only Ever Yours by Louise O'Neill
Louise O'Neill
Used - Very Good
Paperback
Quercus Publishing
2015-07-02
400
1784294004
9781784294007
Winner of Irish Book Awards: Sunday Independent Newcomer of the Year 2014 (UK) Winner of YA Book Prize 2015 (UK)
Book picture is for illustrative purposes only, actual binding, cover or edition may vary.
This is a used book - there is no escaping the fact it has been read by someone else and it will show signs of wear and previous use. Overall we expect it to be in very good condition, but if you are not entirely satisfied please get in touch with us.