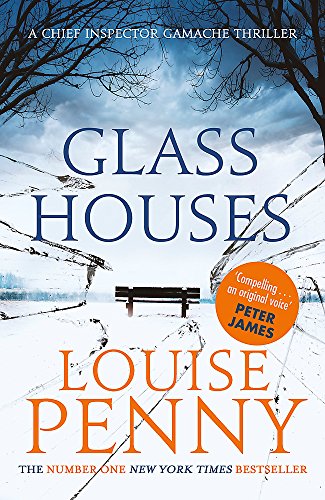 One cold November day, a mysterious figure appears on the village green in Three Pines, causing unease, alarm and confusion among everyone who sees it. Chief Superintendent, Armand Gamache knows something is seriously wrong, but all he can do is watch and wait, hoping his worst fears are not realised. But when the figure disappears and a dead body is discovered, it falls to Gamache to investigate.

In the early days of the murder inquiry, and months later, as the trial for the accused begins, Gamache must face the consequences of his decisions, and his actions, from which there is no going back . . .

Gripping, surprising and powerful, Glass Houses is the new ingenious and illuminating novel from number one bestseller, Louise Penny, which will leave you spellbound until the final page.

Chief Superintendent Armand Gamache of the Quebec police is one of the most interesting detectives in crime fiction * The Times *
A cracking storyteller, who can create fascinating characters, a twisty plot and wonderful surprise endings. * Ann Cleeves *
Glass Houses, along with many of the other Gamache books, is so compelling that . . . what's going on in the world outside the novel is just noise. * Washington Post *
. . . Three Pines is a sublime metaphor for the precariousness of harmony wherever we find it . . . one of the most entrancing fictional worlds in popular literature . . . * Booklist *
On all counts, Glass Houses succeeds brilliantly, full of elegant prose, intricate plots, and - most of all - Penny's moving, emotionally complex hero and his circle of friends and colleagues. * Seattle Times *
The award-winning Penny does not rest on her laurels with this challenging and timely book. Though touched by the evils of the outside world, Three Pines remains a singular place away from time * Library Journal *
A meticulously built mystery that follows a careful ascent toward a breaking point that will leave you breathless * Kirkus Reviews *
Penny's latest is one of her best ever. This is the perfect holiday weekend book. * Globe & Mail *
Once again, she is on the cusp of literary transcendence. * Criminal Element *
Penny's absorbing, intricately plotted 13th Gamache novel proves she only gets better at pursuing dark truths with compassion and grace. * People *
A white-knuckle ending . . . If it is conceivable for Penny to top herself, she has done so in this soul-searching, psychologically insightful journey into each of her memorable characters * Bookreporter.com *
Penny's poetic style of writing and her deeply realized characters, with their mix of flaws and heroism, make her novels irresistible . . . a fascinating novel that is sure to appeal to a variety of readers - whether they typically enjoy mysteries or not. * ShelfAwareness *
Brilliant . . . A serious exploration of justice and conscience and also a hugely entertaining and satisfying mystery * Ann Cleeves *

GOR008773594
Glass Houses by Louise Penny
Louise Penny
Chief Inspector Gamache
Used - Very Good
Hardback
Little, Brown Book Group
2017-08-29
400
0751566578
9780751566574
N/A
Book picture is for illustrative purposes only, actual binding, cover or edition may vary.
This is a used book - there is no escaping the fact it has been read by someone else and it will show signs of wear and previous use. Overall we expect it to be in very good condition, but if you are not entirely satisfied please get in touch with us.