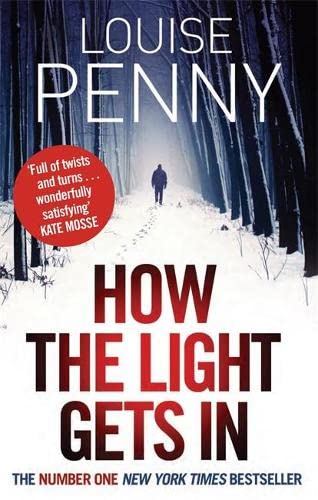 How The Light Gets In
by Louise Penny

How The Light Gets In Summary

How The Light Gets In by Louise Penny

Shortlisted for the CWA Gold Dagger 2014

As a fierce, unrelenting winter grips Quebec, shadows are closing in on Chief Inspector Armand Gamache. Most of his best agents have left the Homicide Department and hostile forces are lining up against him.

When Gamache receives a message about a mysterious case in Three Pines, he is compelled to investigate -- a woman who was once one of the most famous people in the world has vanished.

As he begins to shed light on the investigation, he is drawn into a web of murder, lies and unimaginable corruption at the heart of the city. Facing his most challenging, and personal, case to date, can Gamache save the reputation of the Surete, those he holds dear and himself?

Evocative, gripping and atmospheric, this magnificent work of crime fiction from international bestselling author Louise Penny will stay with you long after you turn the final page.

Customer Reviews - How The Light Gets In

How The Light Gets In Reviews

Once again, Penny delivers a masterful, nuanced suspense novel in which tone and setting are just as riveting as the murderer's who and why * People Magazine *
Masterful . . . unfolds with subtlety and intelligence. Once again, Penny impressively balances personal courage and faith with heartbreaking choices and monstrous evil * Publishers Weekly *
Subtle, elegant and beautifully written * Daily Mirror *
Louise Penny twists and turns the plot expertly tripping the reader up just at the moment you think you might have solved the mystery * Daily Express *
Another bravura performance from an author who has reinvented the village mystery as profoundly as Dashiell Hammett transformed the detective novel * Booklist *
Clever, full of twists and turns, a wonderfully satisfying -- and moving -- addition to Penny's atmospheric, distinctive series * Kate Mosse *

GOR006208211
How The Light Gets In by Louise Penny
Louise Penny
Chief Inspector Gamache
Used - Very Good
Paperback
Little, Brown Book Group
2014-11-06
544
075154423X
9780751544237
Short-listed for Edgar Awards 2014 (UK) Long-listed for CWA Goldsboro Gold Dagger 2014 (UK)
Book picture is for illustrative purposes only, actual binding, cover or edition may vary.
This is a used book - there is no escaping the fact it has been read by someone else and it will show signs of wear and previous use. Overall we expect it to be in very good condition, but if you are not entirely satisfied please get in touch with us.