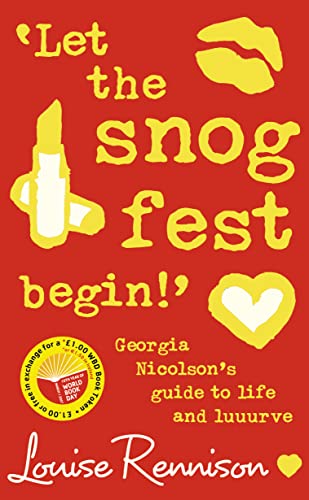 A hilarious new guide from bestselling author Louise Rennison, especially for World Book Day. Georgia gives her top tips on how to look cool and how NOT to behave if you want to hang on to your Sex God.

A hilarious new guide from bestselling author Louise Rennison, especially for World Book Day. Georgia gives her top tips on how to look cool and how NOT to behave if you want to hang on to your Sex God.

Because I am such a generous, caring person, and because I love you all so much, I decided to write this little book offering you my wisdomosity vis a vis how to hang on to your one and only Sex God - or your many, if you suffer from red-bottomosity.

As you know, I have spent a lot of time on the rack or love, so I haven't quite worked out how to remain the girlfriend of a Sex God, as such. But I've certainly learned from experience what NOT to do. You need to keep your cool at all times, avoid looking like a prat whenever possible, and not spend your life in foolsville. Here are a few of my handy hints of situations to avoid at all costs. Then you'll be free to let the snog fest begin!

`You'll be falling about laughing at this.' Mizz

GOR000369733
`Let the snog fest begin!': Georgia Nicolson's Guide to Life and Luuurve by Louise Rennison
Louise Rennison
Used - Very Good
Paperback
HarperCollins Publishers
2007-02-19
112
0007244045
9780007244041
N/A
Book picture is for illustrative purposes only, actual binding, cover or edition may vary.
This is a used book - there is no escaping the fact it has been read by someone else and it will show signs of wear and previous use. Overall we expect it to be in very good condition, but if you are not entirely satisfied please get in touch with us.