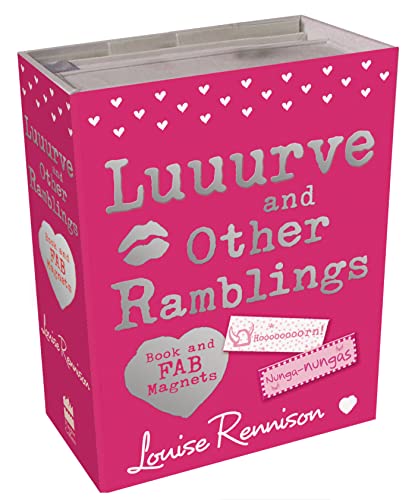 Luuurve and Other Ramblings
by Louise Rennison

Luuurve and Other Ramblings Summary

Luuurve and Other Ramblings: Megafab Magnets and Book Gift Set by Louise Rennison

Decorate your locker, mirror or even your fridge with these hilarious `Georgia speak' magnets. Use them to make up your own Georgia-tastic sentences and let your creativitosity run wild and free!

For the very dim among you, there's also a fabbity-fab guide to `Georgia speak' with her tip top bon phrases and advice on when its best NOT to use the rudey-dudey ones... So let out your inner Billy Shakespeare. You know you want to!!

Luuurve and Other Ramblings Reviews

GOR002640399
Luuurve and Other Ramblings: Megafab Magnets and Book Gift Set by Louise Rennison
Louise Rennison
Used - Very Good
Hardback
HarperCollins Publishers
2009-02-05
160
0007301235
9780007301232
N/A
Book picture is for illustrative purposes only, actual binding, cover or edition may vary.
This is a used book - there is no escaping the fact it has been read by someone else and it will show signs of wear and previous use. Overall we expect it to be in very good condition, but if you are not entirely satisfied please get in touch with us.