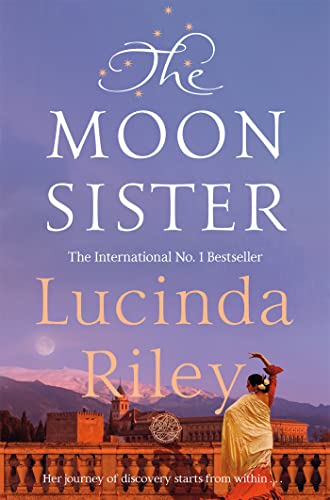 The Moon Sister
by Lucinda Riley

In Stock
$20.49
inc. GST
The Moon Sister is the fifth instalment in The Seven Sisters series, by the Sunday Times bestseller Lucinda Riley.
Very Good Good
33 in stock

The Moon Sister by Lucinda Riley

The Moon Sister is the fifth epic story in the Seven Sisters series by the international number one bestseller Lucinda Riley.

After the death of her father - Pa Salt, an elusive billionaire who adopted his six daughters from around the globe - Tiggy D'Apliese , trusting her instincts, moves to the remote wilds of Scotland. There she takes a job doing what she loves; caring for animals on the vast and isolated Kinnaird estate, employed by the enigmatic and troubled Laird, Charlie Kinnaird.

Her decision alters her future irrevocably when Chilly, an ancient gipsy who has lived for years on the estate, tells her that not only does she possess a sixth sense, passed down from her ancestors, but it was foretold long ago that he would be the one to send her back home to Granada in Spain . . .

In the shadow of the magnificent Alhambra, Tiggy discovers her connection to the fabled gypsy community of Sacromonte, who were forced to flee their homes during the civil war, and to 'La Candela' the greatest flamenco dancer of her generation.

From the Scottish Highlands and Spain, to South America and New York, Tiggy follows the trail back to her own exotic but complex past. And under the watchful eye of a gifted gypsy bruja she begins to embrace her own talent for healing.

But when fate takes a hand, Tiggy must decide whether to stay with her new-found family or return to Kinnaird, and Charlie . . .

The Moon Sister follows The Seven Sisters, The Storm Sister, The Shadow Sister and The Pearl Sister.

A beautifully written series . . . A magical adventure. -- Woman's World Magazine, USA
A breathtaking adventure brimming with cruelty, tragedy, passion, obsession and, most of all, the music, rhythm and spirit of Spain's gitano community... There is a real fire to this exciting new chapter in the captivating Seven Sisters odyssey, an extraordinary sense of drawing inexorably nearer to solving the intriguing conundrum of Pa Salt's death and the tantalizing mystery of the missing sister. -- Lancashire Evening Post
A heartfelt, powerful, and spiritual saga. I don't know how she infuses her characters with so much humanity, passion, warmth and love, keeps the plot moving and brings the past alive so profoundly, but she does so beautifully. If you've ever wondered if writers are magicians, just read one of Lucinda Riley's novels and you'll have the answer. -- M.J. Rose, New York Times bestselling author
This family saga moves between past and present, and is an engrossing read. I've read all of the series so far . . . possibly the best one yet! -- North Norfolk Living
Riley's meticulous research and attention to detail immerse readers in historical background, bringing Tiggy and her Spanish birth family to life. Fans of Kristin Hannah, Kate Morton, and Riley's previous novels will adore this anticipated series continuation. -- Booklist, USA
The tension, sweeping descriptions, and multiple subplots catch the reader early and don't let go. Touches of magical realism and musical culture add to the gorgeous descriptions and historical details. -- Historical Novel Society, USA
In each of her series novels, Riley draws magnetic and strong women, polar opposites in personality but all of them fearless and determined. This entry will delight followers of Riley's series, but also appeal to new readers -- Library Journal, USA

GOR009772165
The Moon Sister by Lucinda Riley
Lucinda Riley
The Seven Sisters
Used - Very Good
Paperback
Pan Macmillan
2019-04-04
768
1509840117
9781509840113
N/A
Book picture is for illustrative purposes only, actual binding, cover or edition may vary.
This is a used book - there is no escaping the fact it has been read by someone else and it will show signs of wear and previous use. Overall we expect it to be in very good condition, but if you are not entirely satisfied please get in touch with us.