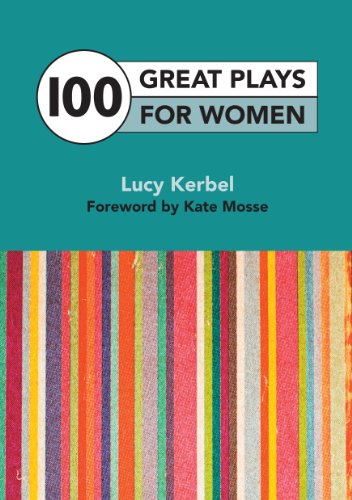 Used Price
$21,49
inc. GST
Free Shipping in Australia
An inspiring guide to a hundred plays that put female performers centre stage, dispelling the myth that 'there aren't any good plays for women'. With a foreword by Kate Mosse.
Very Good

Lucy Kerbel's 100 Great Plays for Women is an inspiring guide to a hundred plays that put female performers centre stage, dispelling the myth that 'there aren't any good plays for women'. With a foreword by Kate Mosse. Women buy the majority of theatre tickets, make up half the acting profession and are often the largest cohort of any youth theatre or drama club. And yet they have traditionally been underrepresented on stage. 100 Great Plays for Women seeks to address this gap by celebrating plays that put female performers centre stage. Lucy Kerbel's myth-busting book features compact and insightful introductions to 100 plays, each of which has an entirely or predominantly female cast, with the female characters taking an equal or decisive role in driving the on-stage action. Also featured are 10 plays for solo female performers. The result is a personal but wide-ranging reappraisal of the theatrical canon, a snapshot of the very best writing - from ancient times right up to the present day - that has female protagonists at its heart. A fascinating mixture of familiar and less well-known works dealing with a broad range of themes, it is an essential resource for all directors and producers looking for plays to stage, writers seeking inspiration and actors trying to track down a new audition piece. It is also an exciting provocation that will have readers, both male and female, championing their own personal favourites. The book is the culmination of a project by Tonic Theatre and the National Theatre Studio. Tonic Theatre was founded by Lucy Kerbel in 2011 to support the theatre industry in achieving greater gender equality in its workforces and repertoires; it partners with leading theatre companies around the UK on a range of projects, schemes and creative works. The National Theatre Studio provides support and resources for both emerging and established theatre-makers of outstanding talent, and contributes to the National's ongoing search for and training of new artists. 'A gem of a book - Lucy Kerbel has done hard-working directors and artistic directors, of spaces large and small, a great service.' Kate Mosse, from her foreword

"Essential... impressive scope and sweep... exhilarating. With luck, theatres will take note and playwrights will be inspired." - Times Literary Supplement

"Highly readable... remarkably eclectic... What makes this such a good read is the author's passion for her subject but also an ability to summarise the guts of a play in very few words, while at the same time putting them into a historical and social context." - British Theatre Guide

"A remarkable assemblage... will prompt many a new production in the years ahead." - The Stage's Books of the Year 2013

"Rich and rewarding... this is an intelligently assembled collection, each play insightfully interrogated, its claims for inclusion persuasively argued. Producers, directors and actors will find much here to intrigue and excite." - The Stage

"Whether you are looking for a thought-provoking play to liven up the amateur repertoire, a play for a room above a pub or one to fill a provincial stage, this book will ensure that you are spoilt for choice." - Drama Resource

"A cornucopia of riches. Lucy Kerbel has done theatre writing great service with this book of significance." - Theatre in Wales

"A must-have for any teacher or director... the long-overdue first step on the path to redressing an age-old imbalance." - Teaching Drama Magazine

"A marvellous record or social history of society and its attitude and representation of women through the ages... full of surprises, discoveries and jogs to our memory." - ReviewsGate.com

Lucy Kerbel is the director of Tonic Theatre, and an award-winning theatre director. Having begun her career as Resident Director at the National Theatre Studio and English Touring Theatre, Lucy went on to direct a range of classics, new writing and work for younger audiences in theatres such as the Bush, Polka Theatre, Royal Court and Soho Theatre. She is a winner of the Old Vic New Voices Award and the Young Angels Theatremakers Award. Lucy has worked extensively in theatre education and is Learning Associate at the National Theatre. Kate Mosse OBE is an English author and broadcaster. She is best known for her 2005 novel Labyrinth, which has been translated into more than 37 languages. In 1996 she co-founded the annual Orange Prize for Fiction (from 2014 the Baileys Women's Prize for Fiction). She is a member of the Board of the National Theatre.

GOR005762972
100 Great Plays for Women by Lucy Kerbel
Lucy Kerbel
Used - Very Good
Paperback
Nick Hern Books
2013-11-14
240
1848421850
9781848421851
N/A
Book picture is for illustrative purposes only, actual binding, cover or edition may vary.
This is a used book - there is no escaping the fact it has been read by someone else and it will show signs of wear and previous use. Overall we expect it to be in very good condition, but if you are not entirely satisfied please get in touch with us.