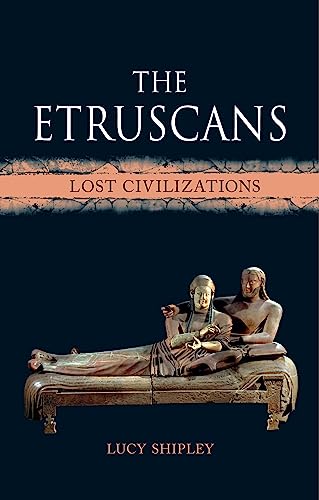 The Etruscans
by Lucy Shipley

Used Price
$34.99
inc. GST
Free Shipping in Australia
This is a new history of the Etruscans, a powerful and influential civilization in ancient Italy who are often thought of as mysterious and unknowable. Covering colonialism and conquest, misogyny and mystique, Etruscan history is woven with the very latest archaeological evidence to provide a unique perspective on this enigmatic people.
Very Good

The Etruscans by Lucy Shipley

The Etruscans were a powerful and influential civilization in ancient Italy. But despite their prominence, they are often misrepresented as mysterious - a strange, unknowable people whose language and culture have largely vanished. Lucy Shipley's new history of the Etruscans presents a different picture: of a people who traded with Greece and shaped the development of Rome, who inspired Renaissance artists and Romantic firebrands and whose influence is still felt strongly in the modern world. Covering colonialism and conquest, misogyny and mystique, Etruscan history is woven with the very latest archaeological evidence to provide a unique perspective on this enigmatic culture, revealing how much we now know, and how much still remains undiscovered. The book explores Etruscan culture through a series of stories that also reveal the biases and prejudices of the present day. It describes the journey of Etruscan objects from the point of their creation through the story of their use, loss, rediscovery and reinvention. From the wrappings of an Egyptian mummy displayed in a fashionable salon to the extra-curricular activities of a member of the Bonaparte family, it takes us on an extraordinary voyage through Etruscan archaeology that leads to surprising and intriguing places.

"The Etruscans is cleverly written, because each chapter deals with one problem and then takes one object or place as an example of that problem. . . . This is a splendid little book, which brings the Etruscans up to date and does much to strip away the mystery that surrounds this lost civilization."-- "Current World Archaeology"
"Shipley's [bridges] deftly the ancient evidence and modern debates, and [shifts] focus seamlessly from the big picture to captivating details. She writes in an engaging, breezy style . . . Shipley's book accomplishes its mission with aplomb: it will not only hold the interest of students and scholars alike, but also speak in powerful ways to the interested lay reader. Indeed, if there is one book among the recent spate of works on the Etruscans that is likely to win over the popular imagination--one as alive to their distinct character and accomplishments as their lost legacy and muddled afterlives--Shipley's book is surely it. For The Etruscans demonstrates that new facts can be more interesting than old fiction."-- "Classical Journal"

Lucy Shipley is the author of Experiencing Etruscan Pots: Ceramics, Bodies and Images in Etruria (2015). She lives in Devon, UK.

GOR009211114
The Etruscans by Lucy Shipley
Lucy Shipley
Lost civilizations
Used - Very Good
Hardback
Reaktion Books
2017-10-01
208
1780238320
9781780238326
N/A
Book picture is for illustrative purposes only, actual binding, cover or edition may vary.
This is a used book - there is no escaping the fact it has been read by someone else and it will show signs of wear and previous use. Overall we expect it to be in very good condition, but if you are not entirely satisfied please get in touch with us.