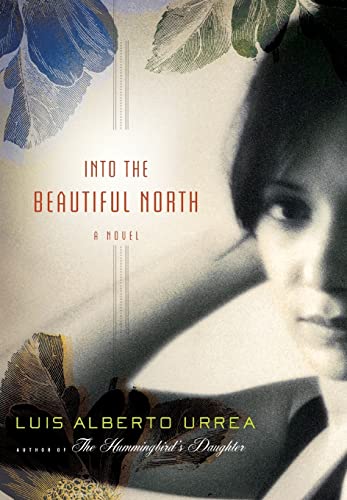 Into The Beautiful North
by Luis Alberto Urrea

Into The Beautiful North Summary

Into The Beautiful North: A Novel by Luis Alberto Urrea

Nineteen-year-old Nayeli works at a taco shop in her Mexican village and dreams about her father, who journeyed to the US when she was young. Recently, it has dawned on her that he isn't the only man who has left town. In fact, there are almost no men in the village - they've all gone north. While watching The Magnificent Seven, Nayeli decides to go north herself and recruit seven men - her own 'Siete Magnificos' - to repopulate her hometown and protect it from the bandidos who plan on taking it over.

Filled with unforgettable characters and prose as radiant as the Sinaloan sun, INTO THE BEAUTIFUL NORTH is the story of an irresistible young woman's quest to find herself on both sides of the fence

Into The Beautiful North Reviews

PRAISE FOR INTO THE BEAUTIFUL NORTH: "[Into the Beautiful North] is deliciously composed...[Urrea writes] in a sweet but serious style...You find it in the dialogue...You find it in the description of the countryside... the plot gathers as much strength as the prose.." -- Chicago Tribune "Awash in a subtle kind of satire...Aa funny and poignant impossible journey...Into the Beautiful North is a refreshing antidote to all the negativity currently surrounding Mexico." -- Dallas Morning News "No great adventure is told without great characters, and Urrea certainly knows how to create them...that Urrea has turned a usually disturbing subject into a book that keeps a smile on your face is a tribute to his storytelling." -- Miami Herald "[A] wondrous yarn in the hands of a terrific storyteller...Urrea's meticulous detail makes the story come to life...Not to trivialize, but these characters cry out for a sequel-maybe a telenovela?--They are too good for just a single outing." -- Seattle Times "A wonderful comic satire...Urrea uses a breathtaking Mexican magical realism to construct a shimmering portrait of the United States." -- Denver Post "With self-awareness and irony, Into the Beautiful North acknowledges its debt to the idealistic quest narrative and the tragic migration story...Urrea simultaneously explicates the seriousness of Mexican-US immigration while drolly narrating a Wizard of Oz-like circular fairy tale." -- Bookslut "A fantastical tale..." -- Newark Star-Ledger "It only takes a few pages of Luis Alberto Urrea's thoroughly enjoyable Into the Beautiful North to start you wondering whether this book will break or warm your heart...So which is it?...A little of both, of course, much like the shared history of both [the U.S. and Mexico]." -- Bookpage "Quest novels announce their purpose in a straightforward manner: Colorful, memorable characters prepare for and embark on a journey of immense significance...Into the Beautiful North is just such a novel. Among the many pleasures...is its big-hearted view of the United States as a foreign country. Since this is a quest, not a political novel, Urrea never gets bogged down in messages." -- San Diego Union-Tribune

Luis Alberto Urrea is the author of The Devil's Highway, winner of a Lannan Literary Award; Across the Wire, winner of the Christopher Award and the highly acclaimed The Hummingbird's Daughter. He has also received an American Book Award, a Western States Book Award and a Colorado Book Award and he has been inducted into the Latino Literary Hall of Fame.

GOR001969948
Into The Beautiful North: A Novel by Luis Alberto Urrea
Luis Alberto Urrea
Used - Very Good
Hardback
Little, Brown & Company
2009-05-19
352
0316025275
9780316025270
Commended for Grand Canyon Reader Award (Teen) 2013
Book picture is for illustrative purposes only, actual binding, cover or edition may vary.
This is a used book - there is no escaping the fact it has been read by someone else and it will show signs of wear and previous use. Overall we expect it to be in very good condition, but if you are not entirely satisfied please get in touch with us.