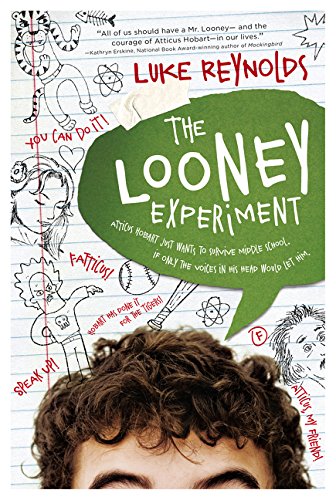 The Looney Experiment
by Luke Reynolds

Out of Stock
$60.99
inc. GST
Humorous and heart-warming, author Luke Reynolds's The Looney Experiment chronicles one boy's journey through bullying, first love, and---with the help of an older than dirt and crazier than insanity itself substitute English teacher named Mr. Looney---an up-close examination of the meaning of courage.
Very Good
Only 0 left

The Looney Experiment by Luke Reynolds

Atticus Hobart couldn't feel lower. He's in love with a girl who doesn't know he exists, he is the class bully's personal punching bag, and to top it all off, his dad has just left the family. Into this drama steps Mr. Looney, a 77-year-old substitute English teacher with uncanny insight and a most unconventional approach to teaching. But Atticus soon discovers there's more to Mr. Looney's methods than he'd first thought. And as Atticus begins to unlock the truths within his own name, he finds that his hyper-imagination can help him forge his own voice, and maybe-just maybe-discover that the power to face his problems was inside him all along.

Atticus Hobart's life isn't so good. He can't bring himself to speak in public. He hears voices in his head. He's in love with the most beautiful girl in school, and he's sure she doesn't know he exists. The school bully, Danny Wills, has too much power, and is completely protected. Danny's father is the baseball coach, and his mother is school board chairperson. He can call Atticus "Fatticus" all he wants, and beat him up with no qualms. Just when Atticus thinks things can't get worse, his father leaves, and his English teacher is replaced by the strangest, oldest teacher on the planet. But this teacher, Mr. Looney, introduces Atticus to new ways of looking at things and, perhaps most important, new ways of looking at himself. Just as Attius seems to be getting his balance, something happens to threaten it all. Luke Reynolds has written a story that will resonate with a lot of young people, both boys and girls. The premise is surprisingly fresh, the characters real and believable, and the writing is simply terrific. This book deserves readership, far beyond the middle-school audience for which it is intended. Don't miss this amazing book. Reviewed by Rosi Hollinbeck City Book Review (San Francisco/Sacramento Book Review), print and online book reviews magazine, 5 star review * City Book Review (San Francisco/Sacramento Book Review) *
Reynolds takes standard elements of the middle-school novel---bullies, low self-esteem, crushes who don't know you're alive, and family troubles---and mixes them into an appealing and compelling story. Narrator Atticus doesn't think he can take much more after his father leaves the family. That is, until Mr. Looney, a long-term substitute, steps into his life. Mr. Looney is unconventional, caring, and understands much of what Atticus is experiencing. He helps Atticus gain confidence through reading a copy of To Kill a Mockingbird autographed by Harper Lee. When the class bully takes things too far, Atticus feels like he's back at square one, but when Mr. Looney needs his help, he finds that he can step up for someone else. Atticus, his friends, and his family are fresh, authentic, and sympathetic in Reynolds' hands. While capably melding character and plot into Atticus' meaningful quest for better self-esteem, Reynolds avoids pat, easy endings in favor of depicting heartening growth in his main character. --- Donna Scanlon * Booklist *
Though this book is clearly meant to be an empowering story for middle school students who can relate to the story, this novel will resonate with any generation. Not only is it a tale of courage and self-empowerment, especially for those who have trouble finding their own voices, it also explores important subjects such as bullying, separation and divorce, emotional and physical abuse, and doing what is right even when it isn't easy. Atticus, who is both the main character and the narrator of the book, at first appears to be completely average. He has trouble in school, he has trouble in sports, and he has trouble with social interactions. But he soon learns that the only person holding him back is himself, and once he realizes this, the real Atticus is revealed. Mr. Looney is equally mysterious in the beginning of the story. His name is not the only thing that implies he could be crazy; his teaching methods also lend themselves to this idea. Loud, ridiculous, and completely off his rocker, he is exactly the type of teacher to get Atticus to open up and begin to feel comfortable in his own skin. With excellent characters and a strong, emotional story, not much else is needed to make The Looney Experiment even more appealing. However, the author doesn't stop there. Instead, Reynolds uses To Kill a Mockingbird to teach Atticus about his own name, about the role of fathers, and about what it means to be courageous. This lesson could not come at a more relevant time in history. This book is real, and though it is meant for a young audience, it does not shy away from the tough topics kids often must face and understood well before they should. The ending does not tie up the story with a perfect little bow, and not every aspect is resolved, but such is life. The Looney Experiment will offer any reader, young or old, the opportunity to view difficult events from a child's point of view, and by the end of the book, they will be better because of it. By Karen Rought * Hypable *

GOR010176738
The Looney Experiment by Luke Reynolds
Luke Reynolds
Used - Very Good
Hardback
Zondervan
2015-08-04
208
0310746426
9780310746423
N/A
Book picture is for illustrative purposes only, actual binding, cover or edition may vary.
This is a used book - there is no escaping the fact it has been read by someone else and it will show signs of wear and previous use. Overall we expect it to be in very good condition, but if you are not entirely satisfied please get in touch with us.