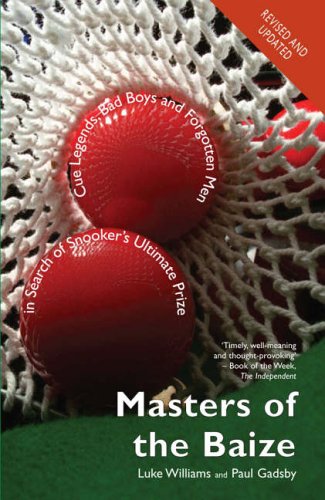 Masters of the Baize
by Luke Williams

Used Price
$20.99
inc. GST
Free Shipping in Australia
The top snooker players in the world compete for several trophies every year, but one carries more prestige than all the others put together - the World Championship.
Very Good Good Well Read

Masters of the Baize Summary

Masters of the Baize: Cue Masters, Bad Boys and Forgotten Men in Search of Snooker's Ultimate Prize by Luke Williams

The top snooker players in the world compete for several trophies every year, but one carries more prestige than all the others put together - the World Championship. No other tournament in the sport carries with it so much history, so many golden moments of spectacular success and dramatic failure. Meticulously researched and including exclusive interview material with Steve Davis, Stephen Hendry and 2005 world champion Shaun Murphy, among others, Masters of the Baize is a comprehensive guide to the men who have lifted the greatest prize in snooker. From the legendary Joe Davis, the first champion in 1927, to modern-day masters like Mark Williams, all the sport's world champions are put under the microscope, while the colourful careers of forgotten figures such as Walter Donaldson and John Pulman and rogue heroes like Alex Higgins and Ronnie O'Sullivan are brought vividly to life. After uncovering the inauspicious origins of the game in nineteenth-century India, the authors examine every former world champion in his own comprehensive chapter. Additionally, a special section focuses on the extraordinary popularity of Jimmy White, by far the greatest player never to have won the title and one of the most emotive names in the sport.

Masters of the Baize Reviews

"Who is the greatest snooker player of them all? And what criteria would you employ to choose that No. 1 man? This entertaining read attempts to answer both questions" -- Book of the Week * Sunday Times *
"Timely, well-meaning and thought-provoking are all arguable descriptions of this guide to the 20 players who have won snooker's world championship" -- Book of the Week * The Independent *
"Commendably thorough, offering some off-the-wall oddments" * Daily Telegraph *
"Diligently researched . . . interesting and illuminating" * Snooker Scene *

Luke Williams and Paul Gadsby are sports journalists and have been snooker fans for as long as they can remember. This is their first book.

GOR001655134
Masters of the Baize: Cue Masters, Bad Boys and Forgotten Men in Search of Snooker's Ultimate Prize by Luke Williams
Luke Williams
Used - Very Good
Hardback
Transworld Publishers Ltd
2005-04-14
272
1840188723
9781840188721
N/A
Book picture is for illustrative purposes only, actual binding, cover or edition may vary.
This is a used book - there is no escaping the fact it has been read by someone else and it will show signs of wear and previous use. Overall we expect it to be in very good condition, but if you are not entirely satisfied please get in touch with us.