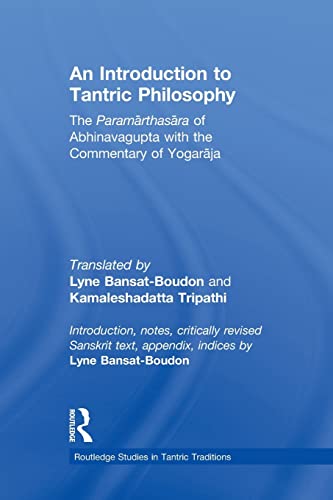 An Introduction to Tantric Philosophy: The Paramarthasara of Abhinavagupta with the Commentary of Yogaraja by Lyne Bansat-Boudon (Ecole Pratique des Hautes Etudes, France)

The Parama rthasa ra, or 'Essence of Ultimate Reality', is a work of the Kashmirian polymath Abhinavagupta (tenth-eleventh centuries). It is a brief treatise in which the author outlines the doctrine of which he is a notable exponent, namely nondualistic S aivism, which he designates in his works as the Trika, or 'Triad' of three principles: S iva, S akti and the embodied soul (nara).

The main interest of the Parama rthasa ra is not only that it serves as an introduction to the established doctrine of a tradition, but also advances the notion of jiv anmukti, 'liberation in this life', as its core theme. Further, it does not confine itself to an exposition of the doctrine as such but at times hints at a second sense lying beneath the evident sense, namely esoteric techniques and practices that are at the heart of the philosophical discourse. Its commentator, Yogara ja (eleventh century), excels in detecting and clarifying those various levels of meaning. An Introduction to Tantric Philosophy presents, along with a critically revised Sanskrit text, the first annotated English translation of both Abhinavagupta's Parama rthasa ra and Yogara ja's commentary.

This book will be of interest to Indologists, as well as to specialists and students of Religion, Tantric studies and Philosophy.

"Clearly, Sanskrit scholars and the growing coterie of serious students of Saivism will profit greatly from a close study of Bansat-Boudon's notes and other supplemental materials; yet, this volume also will be of use to those with less than a professional commitment to the study of Saiva materials, as the clarity of the authors' translations affords an easy access to the subject, even, perhaps especially, for those who do not read Sanskrit. Certainly, then, every college and university library worth its salt should own a copy, but I also imagine-and hope-the readership of this outstanding text will extend to a wider audience, beyond the confines of academia."
John Nemec, University of Virginia
Journal of the American Oriental Society 135.2, pages 343-345 (2015) 343
Lyne Bansat-Boudon is Professor in the Section des sciences religieuses at the E cole Pratique des Hautes E tudes (EPHE) in Paris, and an Honorary Senior Member of the Institut Universitaire de France (IUF). Her main fields of research are Sanskrit Literature and Poetics, Aesthetics and the S aiva tradition. She published in 1992 Poetique du theatre indien. Lectures du Natyacastra, and, in 2006, as the chief editor of the volume and a translator, Theatre de l'Inde ancienne, Gallimard (Bibliotheque de la Pleiade). Kamaleshadatta Tripathi is Emeritus Professor at the Benares Hindu University, India, where he was Dean of the Faculty of Sanskrit Learning and Theology and Head of the Department of Religious and Agamic Studies. For several years he also was the director of the Kalidasa Akademi in Ujjain. His research interests include Agamic Philosophy, Hindu Theology, Philosophy of Grammar, Sanskrit Literature, Poetics and Aesthetics.
1. Introduction 2. Translation of Paramarthasara and Commentary by Yogaraja, with notes 3. Sanskrit Text 4. Glossary
NLS9780415836951
9780415836951
0415836956
An Introduction to Tantric Philosophy: The Paramarthasara of Abhinavagupta with the Commentary of Yogaraja by Lyne Bansat-Boudon (Ecole Pratique des Hautes Etudes, France)
Lyne Bansat-Boudon (Ecole Pratique des Hautes Etudes, France)
New
Paperback
Taylor & Francis Ltd
2013-02-15
466
N/A
Book picture is for illustrative purposes only, actual binding, cover or edition may vary.
This is a new book - be the first to read this copy. With untouched pages and a perfect binding, your brand new copy is ready to be opened for the first time
Trustpilot