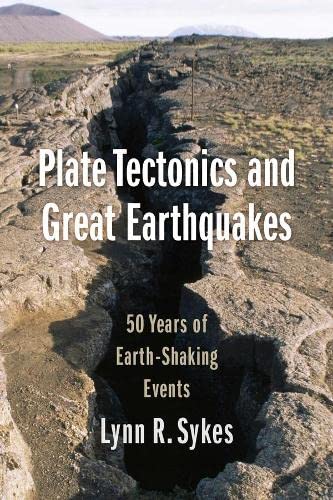 In Stock
$43.99
inc. GST
Lynn R. Sykes played a key role in the birth of plate tectonics, conducting revelatory research on earthquakes. In this book, he gives an invaluable insider's perspective on the theory's development and its implications.
Very Good
Only 1 left

The theory of plate tectonics transformed earth science. The hypothesis that the earth's outermost layers consist of mostly rigid plates that move over an inner surface helped describe the growth of new seafloor, confirm continental drift, and explain why earthquakes and volcanoes occur in some places and not others. Lynn R. Sykes played a key role in the birth of plate tectonics, conducting revelatory research on earthquakes. In this book, he gives an invaluable insider's perspective on the theory's development and its implications.

Sykes combines lucid explanation of how plate tectonics revolutionized geology with unparalleled personal reflections. He entered the field when it was on the cusp of radical discoveries. Studying the distribution and mechanisms of earthquakes, Sykes pioneered the identification of seismic gaps-regions that have not ruptured in great earthquakes for a long time-and methods to estimate the possibility of quake recurrence. He recounts the various phases of his career, including his antinuclear activism, and the stories of colleagues around the world who took part in changing the paradigm. Sykes delves into the controversies over earthquake prediction and their importance, especially in the wake of the giant 2011 Japanese earthquake and the accompanying Fukushima disaster. He highlights geology's lessons for nuclear safety, explaining why historic earthquake patterns are crucial to understanding the risks to power plants. Plate Tectonics and Great Earthquakes is the story of a scientist witnessing a revolution and playing an essential role in making it.

Plate Tectonics and Great Earthquakes is an enjoyable read about Lynn Sykes's firsthand experiences and historic contributions to seismology and to the world-shaking development of plate tectonics. -- Rick Aster, Warner College of Natural Resources, Colorado State University
A personal, firsthand tour through one of the great scientific revolutions of the past several centuries, from a major contributor to that revolution. -- Daniel Davis, Stony Brook University
Lynn Sykes, one of the scientific revolutionaries who gave us plate tectonics, tells his story, with special emphasis on earthquake prediction. Although earthquake prediction has been a topic perceived by some as pursued only by "fools and charlatans," Sykes defends it not only as worthy of pursuit but also, however imperfect, as likely to be societally valuable. -- Peter Molnar, Distinguished Professor of Geological Sciences, University of Colorado, Boulder
Lynn R. Sykes is world-renowned for his contributions to seismology. In this retrospective, he reflects on his fruitful scientific journey, from reading lots of seismograms and making fundamental contributions to the theory of plate tectonics and the understanding of great earthquakes, to the public policy implications of his earthquake research. -- Martin Reyners, GNS Science, New Zealand
A leader in the plate tectonic revolution, Sykes also spearheaded studies of earthquake hazards and prediction for five decades. His unvarnished reflections and insights will captivate anyone intrigued by the irregular rhythms and spasms of the earth or curious about the scientists who strive to decipher them. -- Rob Wesson, former chief, USGS Office of Earthquakes, Volcanoes, and Engineering, and author of Darwin's First Theory: Exploring Darwin's Quest for a Theory of Earth
A career-capping tour de force that is part memoir, part scientific history. * Civil Engineering *

Lynn R. Sykes is Higgins Professor Emeritus of Earth and Environmental Sciences at Columbia University's Lamont-Doherty Earth Observatory. His application of earthquake science to monitoring underground explosions was crucial to treaties limiting nuclear testing. He is the author of Silencing the Bomb: One Scientist's Quest to Halt Nuclear Testing (Columbia, 2017).

GOR010226716
Plate Tectonics and Great Earthquakes: 50 Years of Earth-Shaking Events by Lynn R. Sykes
Lynn R. Sykes
Used - Very Good
Hardback
Columbia University Press
2019-05-17
272
0231186886
9780231186889
N/A
Book picture is for illustrative purposes only, actual binding, cover or edition may vary.
This is a used book - there is no escaping the fact it has been read by someone else and it will show signs of wear and previous use. Overall we expect it to be in very good condition, but if you are not entirely satisfied please get in touch with us.