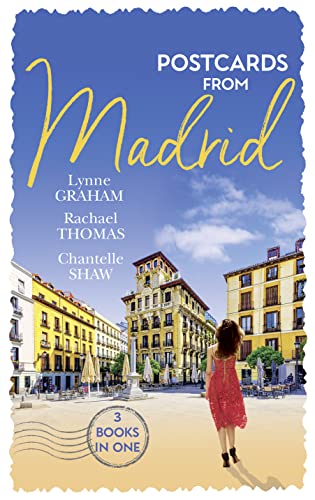 Postcards From Madrid
by Lynne Graham

Sizzling nights in the Spanish sun!

Sizzling nights in the Spanish sun!

Antonio Rocha is horrified that Sophie Cunningham is raising his orphaned baby niece in a trailer! However, Antonio soon sees how loving, kind, and beautiful Sophie is and knows how to indulge his newfound a attaction: a marriage arrangement on his terms...

Lydia Carter-Wilson is horrified by the debts her father ran up in her name. Then magnate Raul Valdez approaches her with an outrageous proposition. If she helps him claim his inheritance, he'll pay off her debts. But there's a catch. If she fails, she will marry Raul!

Duke Javier Herrera needs a wife in order to inherit his family's banking business. In Grace Beresford, whose father swindled Javier out of millions, Javier can take revenge and a convenient wife...

Lynne Graham lives in Northern Ireland and has been a keen romance reader since her teens. Happily married, Lynne has five children. Her eldest is her only natural child. Her other children, who are every bit as dear to her heart, are adopted. The family has a variety of pets, and Lynne loves gardening, cooking, collecting allsorts and is crazy about every aspect of Christmas. Rachael has loved writing stories since she was a small child, but it was the discovery of Mills and Boon as a teenager, that started her love affair with romance. In 2013 she entered Harlequin's So You Think You Can Write competition and her entry earned her a place in the Top Ten. That entry, A Deal Before the Altar became her debut title. Rachael lives in Wales on a farm and loves exploring. Her latest adventure was in the Sahara Desert for charity - and research! Chantelle Shaw enjoyed a happy childhood making up stories in her head. Always an avid reader, Chantelle discovered Mills & Boon as a teenager and during the times when her children refused to sleep, she would pace the floor with a baby in one hand and a book in the other! Twenty years later she decided to write one of her own. Writing takes up most of Chantelle's spare time, but she also enjoys gardening and walking. She doesn't find domestic chores so pleasurable!

GOR009768300
Postcards From Madrid: Married by Arrangement / Valdez's Bartered Bride / The Spanish Duke's Virgin Bride (Innocent Mistress, Virgin Bride) by Lynne Graham
Lynne Graham
Used - Very Good
Paperback
HarperCollins Publishers
2019-02-21
0263275698
9780263275698
N/A
Book picture is for illustrative purposes only, actual binding, cover or edition may vary.
This is a used book - there is no escaping the fact it has been read by someone else and it will show signs of wear and previous use. Overall we expect it to be in very good condition, but if you are not entirely satisfied please get in touch with us.