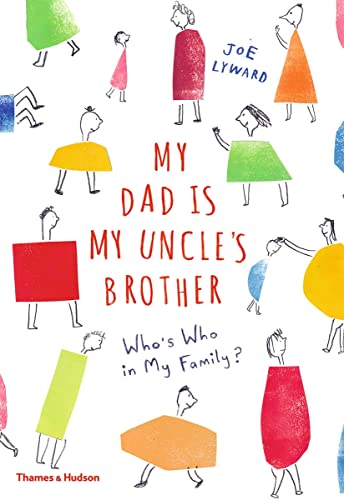 My Dad is My Uncle's Brother
by Lyward Joe

My Dad is My Uncle's Brother Summary

My Dad is My Uncle's Brother by Lyward Joe

The family is a thing of many parts - a complicated puzzle made of brothers, sisters, mums, dads, uncles, friends, grandparents. Sooner or later all of us get lost in the maze of kinship, trying to understand who is a great-uncle and a stepfather, who's married to whom, what in-laws are, and why someone who's only just been born can immediately becomes uncle or nephew to someone. The protagonist of this hilarious book, together with his father, ventures to climb his own genealogical tree, happily finding his own place as a part of this big, lively, crowded universe.

My Dad is My Uncle's Brother Reviews

'Such a fun concept, creatively and inclusively handled' - Two in a Teepee
'A wonderful way of introducing the notion of families to children' - Armadillo Magazine
'Fascinating ... will provoke lots of discussion and help little ones to see just how their family fits together' - Parents in Touch
'There is a real sense of play in the way the characters have been drawn and collaged from a range of brightly coloured shapes' - The Association of Illustrators

Joe Lyward studied Illustration at Plymouth University and has an MA in Children's Book Illustration from the Cambridge School of Art. He won a graphite Pencil at the D&AD Awards in 2016, and was a V&A Illustration Awards nominee in 2012.

GOR009715027
My Dad is My Uncle's Brother by Lyward Joe
Lyward Joe
Used - Very Good
Hardback
Thames & Hudson Ltd
2018-04-01
28
0500651582
9780500651582
N/A
Book picture is for illustrative purposes only, actual binding, cover or edition may vary.
This is a used book - there is no escaping the fact it has been read by someone else and it will show signs of wear and previous use. Overall we expect it to be in very good condition, but if you are not entirely satisfied please get in touch with us.