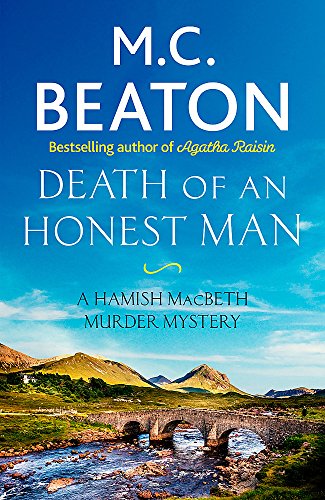 Death of an Honest Man by M.C. Beaton

Death of an Honest Man by M.C. Beaton

Nobody loves an honest man, or that was what police sergeant Hamish Macbeth tried to tell newcomer Paul English.

Paul attended church in Lochdubh. He told the minister, Mr. Wellington, that his sermons were boring. He told tweedy Mrs. Wellington that she was too fat. Angela Brody was told her detective stories were pap for the masses and it was time she wrote literature instead. He accused Hamish of having dyed his fiery red hair. He told Jessie Currie - who repeated all the last words of her twin sister - that she needed psychiatric help.

'I speak as I find,' he bragged. Voices saying, 'I could kill that man,' could be heard from Lochdubh to Cnothan.

Now Hamish is faced with a bewildering array of suspects. And he's lost the services of his clumsy policeman, Charlie, who has resigned from the force after throwing Chief Inspector Blair into the loch. Can Hamish find the killer on his own?

A complex murder plot is well sustained by quick pen sketches of the Highland scenery . . . twists in the clever plot lead you up many a mountain path in the company of Hamish Macbeth! * My Weekly *
Fans'll love this Highland hullabaloo * Evening Telegraph *
With plenty of one-liners, beautiful descriptions of Scotland and a whole load of unexpected happenings, you are in for a real treat here * The Sun *
M.C. Beaton is the author of both the Agatha Raisin and Hamish Macbeth series, as well as numerous Regency romances. Her Agatha Raisin books are currently being turned into a TV series on Sky. She lives in Paris and in a Cotswold village that is very much like Agatha's beloved Carsely.
GOR008938624
9781472117250
1472117255
Death of an Honest Man by M.C. Beaton
M.C. Beaton
Hamish Macbeth
Used - Very Good
Hardback
Little, Brown Book Group
2018-02-22
240
N/A
Book picture is for illustrative purposes only, actual binding, cover or edition may vary.
This is a used book - there is no escaping the fact it has been read by someone else and it will show signs of wear and previous use. Overall we expect it to be in very good condition, but if you are not entirely satisfied please get in touch with us
Trustpilot