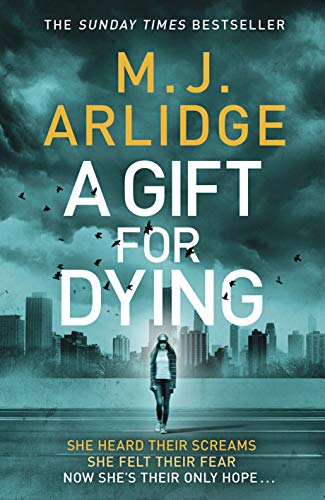 A Gift for Dying
by M. J. Arlidge

A Gift for Dying Summary

A Gift for Dying by M. J. Arlidge

'Strikingly well-told, and with a compelling central character' Daily Mail

With just one look, she knows how and when you will die . . .

Nothing surprises Adam Brandt anymore. As a forensic psychologist, he's seen and heard everything.

That is, until he meets Kassie.

Because she claims to have a terrible gift - with one look into your eyes, she can see when and how you will die.

But then a serial killer starts wreaking havoc across the city, and only Kassie seems to know where he'll strike next.

Against all his intuition, Adam starts to believe her.

He just doesn't realise how dangerous this trust might be . . .

A Gift for Dying Reviews

Strikingly well-told, and with a compelling central character, it has the feel of a television drama * Daily Mail *
The bestselling author of the Helen Grace series is back with another gripping thriller that will be sure to keep you up late into the night turning those pages * Living North, 2019's best books *
Best new books to read this March * Cosmopolitan *
Praise for MJ Arlidge * - *
The New Jo Nesbo * Judy Finnigan *
Chills to the bone * Daily Mail *
A grisly, gripping thriller * Sunday Mirror *

M. J. Arlidge has worked in television for the last fifteen years, specializing in high-end drama production, including the prime-time crime serials Torn, The Little House and Silent Witness. Arlidge also pilots original crime series for both UK and US networks. In 2015 his audio exclusive Six Degrees of Assassination was a Number One bestseller.

His first thriller, Eeny Meeny, was the UK's bestselling crime debut of 2014. It was followed by the bestselling Pop Goes the Weasel, The Doll's House, Liar Liar, Little Boy Blue, Hide and Seek, Love Me Not, and Down to the Woods.