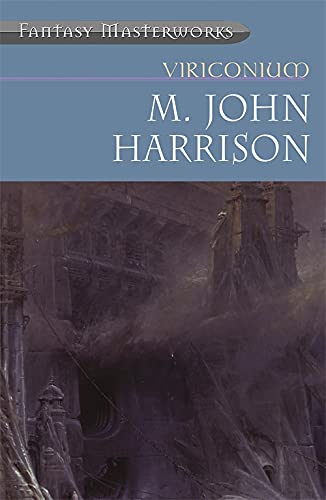 In Viriconium, the young men whistle to one another all night long as they go about their deadly games. If you wake suddenly, you might hear footsteps running, or an urgent sigh. After a minute or two, the whistles move away in the direction of the Tinmarket or the Margarethestrasse. The next day, some lordling is discovered in the gutter with his throat cut. Who can tell fantasy from reality, magic from illusion, hero from villain, man from monster ... in Viriconium?

Published here for the first time in one volume, and in the author's preferred order, are all the Viriconium stories, originally published in four books: The Pastel City, A Storm of Wings, In Viriconium and Viriconium Nights.

"The world that Harrison depicts is intricate and authentic, peopled with a multitude of strange yet lifelike characters--a combination which serves to make his richly imagined empire of Viriconium feel very real indeed.... This omnibus collection from the author of Light" "is canon-reading for those who wish to know the genre's roots, as well as the heights, to which it can aspire."--"Kirkus Reviews," starred review

M. John Harrison (1945 - ) Michael John Harrison is the author of, amongst others, the Viriconium stories, The Centauri Device, Climbers, The Course of the Heart, Signs of Life, Light and Nova Swing. He has won the Boardman Tasker Award (Climbers), the James Tiptree Jr Award (Light) and the Arthur C. Clarke Award (Nova Swing). He lives in Shropshire.

GOR001571482
Viriconium by M. John Harrison
M. John Harrison
Fantasy Masterworks
Used - Very Good
Paperback
Orion Publishing Co
2000-07-13
576
1857989953
9781857989953
N/A
Book picture is for illustrative purposes only, actual binding, cover or edition may vary.
This is a used book - there is no escaping the fact it has been read by someone else and it will show signs of wear and previous use. Overall we expect it to be in very good condition, but if you are not entirely satisfied please get in touch with us.