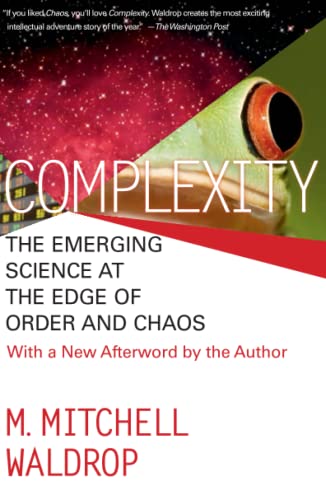 Complexity: The Emerging Science at the Edge of Order and Chaos by M.M. Waldrop

In a rented convent in Santa Fe, a revolution has been brewing. The activists are not anarchists, but rather Nobel Laureates in physics and economics such as Murray Gell-Mann and Kenneth Arrow, and pony-tailed graduate students, mathematicians, and computer scientists down from Los Alamos. They've formed an iconoclastic think tank called the Santa Fe Institute, and their radical idea is to create a new science called complexity. These mavericks from academe share a deep impatience with the kind of linear, reductionist thinking that has dominated science since the time of Newton. Instead, they are gathering novel ideas about interconnectedness, coevolution, chaos, structure, and order - and they're forging them into an entirely new, unified way of thinking about nature, human social behavior, life, and the universe itself. They want to know how a primordial soup of simple molecules managed to turn itself into the first living cell - and what the origin of life some four billion years ago can tell us about the process of technological innovation today. They want to know why ancient ecosystems often remained stable for millions of years, only to vanish in a geological instant - and what such events have to do with the sudden collapse of Soviet communism in the late 1980s. They want to know why the economy can behave in unpredictable ways that economists can't explain - and how the random process of Darwinian natural selection managed to produce such wonderfully intricate structures as the eye and the kidney. Above all, they want to know how the universe manages to bring forth complex structures such as galaxies, stars, planets, bacteria, plants, animals, and brains. There are commonthreads in all of these queries, and these Santa Fe scientists seek to understand them. Complexity is their story: the messy, funny, human story of how science really happens. Here is the tale of Brian Arthur, the Belfast-born economist who stubbornly pushed his theories of economic ch

The Washington Post If you liked Chaos, you'll love Complexity. Waldrop creates the most exciting intellectual adventure story of the year.
The New York Times Book Review Lucidly shows physicists, biologists, computer scientists and economists swapping metaphors and reveling in the sense that epochal discoveries are just around the corner....[Waldrop] has a special talent for relaying the exhilaration of moments of intellectual insight.
Douglas R. Hofstadter author of Goetel, Esther, Bach One comes away from Complexity both intellectually excited by ideas and emotionally involved with the people struggling to formulate them. This is a deep tale of science in the making.

M. Mitchell Waldrop has his doctorate in elementary particle physics and is the author of Man-Made Minds. He spent ten years as a senior writer for Science magazine, where he is now a contributing correspondent.