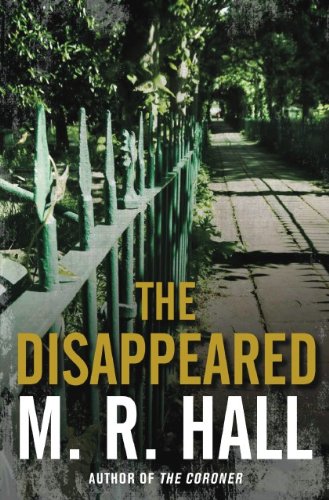 The Disappeared
by M. R. Hall

In Stock
$16.99
+10% GST
The second gripping novel from the author of The Coroner
Very Good Good Well Read
Only 4 left

The Disappeared by M. R. Hall

Two young British students, Nazim Jamal and Rafi Hassan vanish without a trace. The police tell their parents that the boys had been under surveillance, that it was likely they left the country to pursue their dangerous new ideals. Seven years later, Nazim's grief-stricken mother is still unconvinced. Jenny Cooper is her last hope.

Jenny is finally beginning to settle into her role as Coroner for the Severn Valley; the ghosts of her past that threatened to topple her, banished to the sidelines once more. But as the inquest into Nazim's disappearance gets underway, the stink of corruption and conspiracy becomes clear . . .

As the pressure from above increases, a code of silence is imposed on the inquest and events begin to spiral out of all control, pushing Jenny to breaking point. For how could she have known that by unravelling the mysteries of the disappeared, she would begin to unearth her own buried secrets?

Enjoyed The Disappeared? Read the rest of the Coroner Jenny Cooper Series: The Coroner, The Redeemed, The Flight, The Chosen Dead, The Burning.

'Fasten your seatbelts for a quality thriller . . . Hall's Gold Dagger-nominated books, quite simply, get better each time. Part of it is the former barrister and TV producer's ability to structure and deliver a thriller that has you keep turning the pages. But Hall is also a hit upon a genuinely fascinating aspect of the justice system . . . The most compelling element of Hall's books, however, is Cooper herself . . . It is wonderful stuff, chillingly plausible' Independent on Sunday

`As premises go, this one's a killer . . . It's a terrific series, meticulously researched, sharply plotted and peopled with sympathetic characters, led by Cooper, who is always aware of the human consequences of failure' Financial Times

`Ed McBain semi-inaugurated the forensics genre, but Patricia Cornwell and Kathy Reichs parleyed his innovations into stratospheric sales. But the field has not become an exclusively female sorority - or an American domain. A highly talented male writer has offered a challenge . . .' Independent

`An edge-of-the-seat thriller . . . this fourth novel in the excellent Jenny Cooper series should come with a health warning' Irish Independent

`A brilliant, original and gripping crime novel - I can't wait for M. R. Hall's next one!' Sophie Hannah

GOR001650571
The Disappeared by M. R. Hall
M. R. Hall
Coroner Jenny Cooper series
Used - Very Good
Paperback
Pan Macmillan
2010-01-01
432
0230711286
9780230711280
N/A
Book picture is for illustrative purposes only, actual binding, cover or edition may vary.
This is a used book - there is no escaping the fact it has been read by someone else and it will show signs of wear and previous use. Overall we expect it to be in very good condition, but if you are not entirely satisfied please get in touch with us.