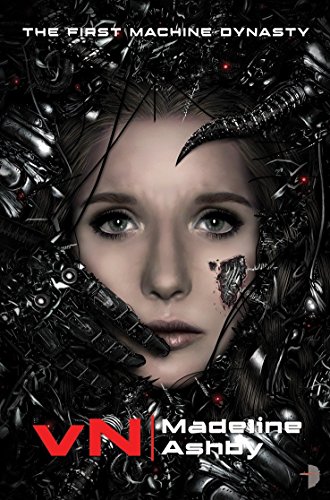 Amy Peterson is a self-replicating humanoid robot known as a VonNeumann.

For the past five years, she has been grown slowly as part of a mixed organic/synthetic family. She knows very little about her android mother's past, so when her grandmother arrives and attacks her mother, Amy wastes no time: she eats her alive.

Now she carries her malfunctioning granny as a partition on her memory drive, and she's learning impossible things about her clade's history - like the fact that she alone can kill humans without failsafing...

"vN did not disappoint. It is a fantastic adventure story that carries a sly philosophical payload about power and privilege, gender and race. It is often profound, and it is never boring."
- Cory Doctorow

"If you have been missing the kind of thought-provoking-yet-exciting stories about artificial creatures that only come along once in a while, vN is well worth grabbing. It's disturbing and sometimes upsetting -- but the ending is a giant insane weird thrill that makes the whole thing pay off."
--Charlie Jane Andres for io9.com

"Picks up where Blade Runner left off and maps territories Ridley Scott barely even glimpsed. (Philip K Dick would have been at home here, but Ashby's prose is better.) vN might just be the most piercing interrogation of humanoid AI since Asimov kicked it all off with the Three Laws."
- Peter Watts, author of Blindsight

"VN fuses cyberpunk with urban fantasy to produce something wholly new. Thre's a heavy kicker in every chapter. Zombie robots, vampire robots, robots as strange and gnarly as human beings. A page-turning treat."- Rudy Rucker, author of the WARE TETRALOGY


"vN is a thrilling adventure story with a well-developed cast of both humans and vNs, which challenges the meaning of being a person without ever being preachy about it."
-Steve Jones, Terror Tree

Madeline Ashby grew up in a household populated by science fiction fans. She graduated from a Jesuit university in 2005, after having written a departmental honors thesis on science fiction. After meeting Ursula K. LeGuin in the basement of the Elliott Bay Book Company that year, she decided to start writing science fiction stories. She has been published in Tesseracts, Flurb, Nature, Escape Pod and elsewhere. Currently, she works as a strategic foresight consultant in Toronto.

GOR010195370
vN by Madeline Ashby
Madeline Ashby
Used - Very Good
Paperback
Watkins Media
2018-11-21
416
0857662627
9780857662620
N/A
Book picture is for illustrative purposes only, actual binding, cover or edition may vary.
This is a used book - there is no escaping the fact it has been read by someone else and it will show signs of wear and previous use. Overall we expect it to be in very good condition, but if you are not entirely satisfied please get in touch with us.